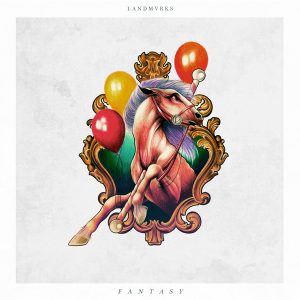 France has made a number of contributions to global rock and metal over the years with Gojira, Betraying The Martyrs, Chunk! No, Captain Chunk! and LANDMVRKS count among the nation’s exports.

The group from Marseille signed with German label Arising Empire early this year, announcing the deal by promising that it would give them “the opportunity to provide our fans with the next album they deserve.”

‘Fantasy’‘s title track does have the sort of ambition and conviction required to represent a significant step forward from anything on debut record ‘Hollows’. It careers around with stylistic jumps that somehow work, the heavy bits vicious and other bits accessibly aesthetic.

‘Scars’ has the same verve, this time driven by guitar work featuring a contagious riff and a solo from Florestand Durand of Novelists (another French band). Guest spots are well-utilised overall, with Betraying The Martyrs’ Aaron Matts’ donating his growl to highlight ‘Reckoning’ and Camille Contreras of Bliss Sigh making an impressive contribution to the surprisingly well-executed ballad, ‘Alive’.

That sort of sensitivity works far better than the muscle-flexing of ‘Wake Up Call’ and single ‘The Worst of You and Me’, which are pointlessly heavy and never going to be playlist picks from this collection.

Certainly worth returning to, however, is ‘Blistering’. Sensibly easing in the hook from the get-go, it has a balanced and grand feel that earns its place at ‘Fantasy’‘s heart. The one hard-to-place gripe is an odd ill-discipline exemplified by a sub-par breakdown and unsatisfying fade-out – something that bafflingly also closes the album.

Such blemishes should not be dwelt upon, as on the whole ‘Fantasy’ impresses. It is ambitious in flashes, packs a punch when it needs to and is based on an enjoyable incarnation of metalcore that is easily accessed.

‘Fantasy’ by LANDMVRKS is released on 2nd November on Arising Empire.