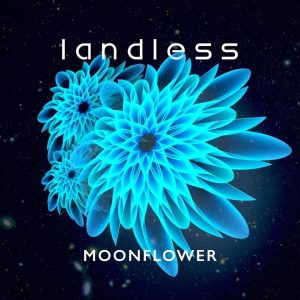 From the dizzyingly intense start of ‘Golden Days’, it’s clear that Slovakian post-hardcore upstarts landless aren’t here to mess around. The band’s second EP, ‘Moonflower’ (following on from 2015’s ‘Bluemist’), showcases their brand of post-hardcore in all its intricate – yet often volatile – glory.

The EP is at its best when at full-throttle on a song such as ‘Connections’, combining surprising structural and tempo changes with spot-on technical drumming and guitar work. The latter is most impressive, with lead guitar passages snaking their way through a hurricane of double-kicks and down-tuned riffing with sublime ease. The screamed vocals (with some clear influence from Architects’ Sam Carter) are powerful when combined with this instrumental storm. The subsequent juxtaposition with the more straight-ahead, clean-sung choruses evokes the style of bands such as Napoleon and Polaris. The band are clearly, unapologetically inspired by such groups, but still manage to retain a sense of individuality which sets them apart.

Unfortunately, landless’ strengths don’t necessarily lie within their melodic sections; a point best summarised by the closing track, called ‘Everglow’. Serving as an acoustic ballad of sorts, it clearly aims to deliver a hefty emotional impact, but ultimately comes across as clichéd and saccharine. It also feels pretty disjointed in the context of the record, taking away a little from the impact of earlier tracks.

This isn’t to say that the EP’s quieter moments all fall flat, of course – the aforementioned ‘Connections’ features a powerful, soaring final minute, and ‘Calm Nights’ is a standout track that sees vocalist Laci Mikolas flit between emotive, Silent Planet-esque screams and catchy cleans.

Besides the somewhat lacklustre conclusion, ‘Moonflower’ is a more than worthy EP from landless. It features some fantastic moments, with the first two tracks in particular acting as a face-melting opening salvo. ‘Moonflower’ solidifies the Slovakians as ones to watch in the near future.

‘Moonflower’ EP by landless is released on 24th May on Famined Records.