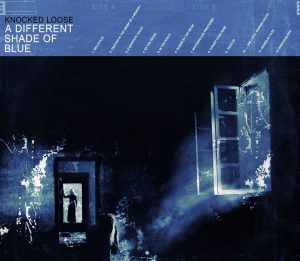 Knocked Loose fought hard to earn themselves a name. 2016’s ‘Laugh Tracks’ was a huge heavy slice of hardcore. Made of thrashing guitars, beatdowns, and howled cathartic vocals. Everything it did, it did well. Hard-hitting single ‘Mistakes Like Fractures’ took their sound and turned the dials to 11. Hence, anticipation for the follow up ‘A Different Shade Of Blue’ is high. It doesn’t disappoint.

‘Belleville’ kicks things off with the most enormous bang. It’s frighteningly powerful opener, and the album just doesn’t let up. As if you thought it would. However, this is a more varied record than their debut. Just don’t expect a shift in style. Guitarists Isaac Hale and Cole Crutchfield even claim to design songs specifically for the mosh pit. Meaning those huge style-defining beatdowns are everywhere, swing your fist and you’ll hit one. Yet, they never feel gratuitous, which is quite an achievement.

Employing feedback and screeching guitars adds an evil-sounding twist to songs such as ‘Guided By The Moon’. While on ‘A Serpent’s Touch,’ the guitars stylishly, slither in and out of each other. There’s grandeur too as ‘By The Grave’ builds up tension before unleashing the beating. From the flow of the vocals, to the unsettling guitar tone only ‘Forget Your Name’ feels like something different, with a Keith Buckley guest spot as a cherry on top.

Returning producer Will Putney allowed the band more space and time to record. It makes for a striking, bolder sound. Especially for vocalist Bryan Garris, who literally walked away unless he was 100% happy. Emotion and power, drip from every word he spits, making the songs raw yet focused. Notably on ‘Denied By Fate’ and ‘By The Grave’ where he deftly shifts from a paint-stripping scream to a chunkier, throaty roar.

On ‘A Different Shade Of Blue’ Knocked Loose whip up a storm of catharsis, breakdowns and bruised knuckles. It’s a vicious, uncompromising ride, which can only build on their fearsome reputation.

‘A Different Shade Of Blue’ by Knocked Loose is released on 23rd August on Pure Noise Records.