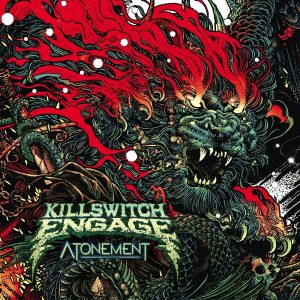 Nothing about Killswitch Engage‘s eighth album has been easy. Recorded in testing circumstances, it was almost derailed completely. Frontman Jesse Leach suffered damaged vocal cords, forcing him to have surgery. Thankfully, the procedure was successful. The experience has shaped ‘Atonement’ turning it into a scream of defiance.

‘Unleashed’ wastes no time in proving Leach is back on form. His voice sounds massive, dredging up the most powerful work of his career. Within moments the guitars start chugging, the hooks start flying and the band has settled into their familiar groove.

Hitting as hard as any of their recent work, it’s a breakneck ride and their energy certainly hasn’t dimmed. Songs like ‘Know Your Enemy’ are as strong as anything in their discography. Likewise, when the band show a flash of something new on ‘Ravenous,’ it sounds absolutely evil. Even the comfortable swagger of ‘Take Control’ comes across like a chainsaw.

In addition, a few great ideas really stand out. Notably, a guest vocal from Chuck Billy takes ‘The Crownless King’ into dirtier territory, which benefits the album as a whole. It’s also huge fun to hear Leach trade screams with former vocalist Howard Jones on ‘The Signal Fire’.

However, there’s a conundrum. You know exactly what you’re getting with a Killswitch Engage record. Especially as guitarist Adam Dutkiewicz handles production, again. It doesn’t help. Yet, it does sound excellent, especially on the muscular ‘As Sure As The Sun Will Rise’. Equally, when choruses dish out heavy doses of melody it really works and yet, feels well-worn. Similarly, when the lyrics broach new topics, notably on ‘I Am Broken Too’, it’s gritty, it’s catchy but you’ve heard the sentiment before.

You knew Killswitch Engage were going to make a huge solid-sounding record and they deliver. ‘Atonement’ has an extremely hard edge and its heartfelt moments sparkle without dragging down the pace. Eight albums in they can still excite, but their unwillingness to explore means it’s an overly familiar journey.

‘Atonement’ by Killswitch Engage is released on 16th August on Music For Nations / Metal Blade Records.