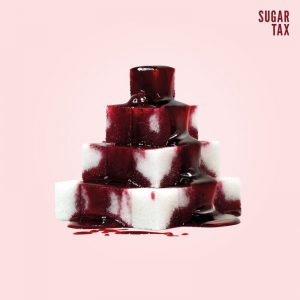 Listening to ‘Glitterati’, it’s not hard to imagine Kid Kapichi swaggering around their native Hastings. A buzz surrounds the song. Using a confident chorus and clever lyricism, it muscled onto Radio 1  playlists. Clearly, it’s a steppingstone to bigger things and serves as a brilliant opener to new EP ‘Sugar Tax’.

Building on everything that made previous EP, ‘Lucozade Dreams’ such a blast, it’s clear they have stepped up their game. However, this time the music is not as straightforward. You’re not getting five songs with the same formula; these feel bolstered and refreshed. At their most assured, ‘Make It On Your Own’ cruises along on a booze-soaked bass riff. Combined with a sly chorus it manages to feel like a hit without breaking a sweat.  In contrast ‘Death Dips’ works harder, throwing around riffs and a funfair vibe to make its mark.

However, when the band push their sound, the results are striking. Imagine Arctic Monkeys infused with the scuzzy riffery favoured by Queens of the Stone Age and you’re not far away. ‘Revolver’ is the clearest example. Leaning on the rhythm section, it gives drummer George MacDonald chance to shine and remains arresting even without a big chorus to fall back on. It’s also surprisingly noisy, so don’t expect this one on the BBC.

The band’s biggest selling point is dual vocalists Jack Wilson and Ben Beetham. Using quick wit and a sharp ear for a melody, they write memorable, catchy songs. Especially as the lyrics feel tied to a place, which creates a real honest flavour. They use sneery punk voices too, harking back to a previous era, even on ‘2019’, their most overtly political statement.

Unafraid to explore and with plenty to say, ‘Sugar Tax’ is everything its leading single promises. Wholly confident, from the blistering opening to its more unusual avenues, it proves Kid Kapichi have the potential to be your new rock n’ roll heroes.