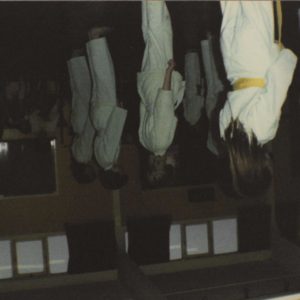 There’s a certain degree of expectation that immediately comes from a band like JAWS. Their particular brand of dreamy indie-pop has already gotten plenty of radio play and TV spots, to the point where the natural course of extrapolation projects itself as another middling indie project whose push comes from easy bankability. It’s admittedly an unfair thought to have, but it’s not like this exact situation hasn’t come up time and time again.

And sure, even after listening to ’The Ceiling’ it’s easy to have those thoughts prevail, but there’s at least a couple more strings to JAWS’ bow that gives them a slight edge. It’s not much, but the advent of deeper synth textures and a focus on a slow-burning atmosphere on tracks like ’Fear’ and ’Feel’ has more in common with the forward-thinking ethos of a band like Foals, and it stands as a handy fit. At times, this feels like a much smarter album than most run-of-the-mill indie efforts, and it greatly benefits from it.

At others though, it’s easy to see where JAWS are conforming to the rigid template that their genre lays out for them, and the contrast is stark. It doesn’t help that Connor Schofield has the anonymous, nasal timbre of so many other indie frontmen, but when paired with markedly less interesting instrumentation of ’Do You Remember? and ’Looking / Passing’, JAWS are clearly selling their own abilities short. There’s a much better band in here than what such safe, basic execution hints at, and the band’s reluctance to show it off is a firm barrier that stops ‘The Ceiling’ from being more than just okay.

That said, the best moments here do stand out a lot, and off the back of those alone, JAWS prove themselves worthy of investing some time in. It’s just a shame that it’s undercut by such blatant padding that really doesn’t offer much else; it’s still fairly solid overall, but it could be a lot better if JAWS just had a bit more faith in their abilities.

‘The Ceiling’ by JAWS is out now on Rough Trade Records.