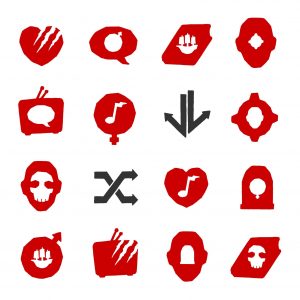 When music paid the bills, Jamie Lenman was miserable. You could hear it in every song he wrote for Reuben. However, now music is more of a hobby, it’s given him freedom.  You literally have no idea what he will do next. ‘Shuffle’ is another curveball. It’s a collection of cover versions and reinterpretations of songs, each presented in a unique style. It certainly sounds like he’s enjoying himself.

Most recent album ‘Devolver’ was full of experimental ideas, here the same approach is taken to the Nth degree. Every song is different. Each with so little in common the album hangs together like the parents’ coats at a school talent show. That’s kinda the point. He’s offering sketches and ideas over a wide sonic palette.  Some sparkle with brilliance, some don’t, but everything is worthwhile. So, in many ways, it feels like a rarities collection, but as you rummage through you can find some real gems.

At its best, songs like ‘Tomorrow Never Knows’ feel rich and complete. They explore new avenues and play on his strengths. His take on Seal’s ‘Killer’ might be muted but it is also disarmingly honest. Similarly, piano ballad ‘The Rememberance’ trades on the heartfelt style of his best work. He also tries his hand at theme tunes with both ‘Adamantium Rage’ and ‘Taxi Driver’ capturing a kind of cinematic magic.

Much of album is a case of expect the unexpected. You get sweary spoken-word interludes, banjo-led musings, and the theme from the ‘Popeye’ cartoon, delivered in the heaviest way imaginable. Then there’s ‘She Bop’, which is downright odd.  The only obvious song choice is ‘Hey Jude’, it sounds exactly like you expect in Lenman’s hands, but shorn of the first half it sorely lacks the song’s real meat.

Baffling and brilliant, ‘Shuffle’ shows just how wildly creative Jamie Lenman can be. While not everything hits the mark, even the sketches and asides have a surprisingly satisfying sparkle.

‘Shuffle’ by Jamie Lenman is released on 5th July on Big Scary Monsters.