Review: Ithaca – The Language Of Injury 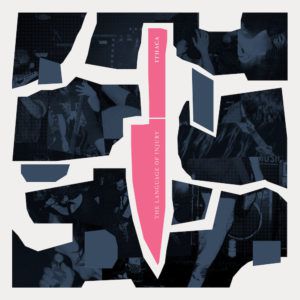 Championed by many as the next big thing in UK hardcore, despite existing for the best part of five years, Ithaca‘s debut full-length doesn’t hold back as they stick their flag firmly in the ground with a mark of intent. It’s a gut-wrenching 32 minutes of metallic hardcore with a cathartic spine. From the jagged, feedback-drenched opener that is ‘New Covenant’ to the riff-chugging of ‘CLSR’ to the dynamism of ‘Better Abuse’, the London-based group deliver a grand and brutal record.

However, don’t be fooled by thinking ‘The Language Of Injury’ is an endless onslaught of aggression. While Djamila Azzouz clearly knows how to dominate with her throat-shredding vocals like on the chaotic ‘Impulse Crush’ and ‘Slow Negative Order’, she and her bandmates show an ability to pull things back to create timely, ethereal moments with clean vocals.

Throughout her words serve as a raw, emotional release from a troubled past. “Please tell me was it fear that kept you here or was it just commiseration?” she growls dissonantly on ‘Secret Space’ as Azzouz questions the time spent with someone. Nevertheless, much like the band’s music ethos, she’s able to look forward proclaiming “Nothing can stop me coming home” on ‘Gilt’.

Musically, Ithaca‘s delivery in concise and thorough with a subtle willingness to try anything they like. Blistering riffs, atmospheric harmonies, brooding bass lines and domineering percussion serve as the fabric. While the aforementioned ‘Better Abuse’ closes the album in spectacular fashion, taking advantage of its five minute run time. A haunting, dizzying guitar riff gives way to an immense assault before one last refrained moment.

For a debut record, ‘The Language Of Injury’ has firmly cemented Ithaca‘s position as a forward-thinking, diverse hardcore band. Their collective execution is unwavering, encompassing an encouraging message of communication using the past to fuel their future.

‘The Language Of Injury’ by Ithaca is released on 1st February on Holy Roar Records.