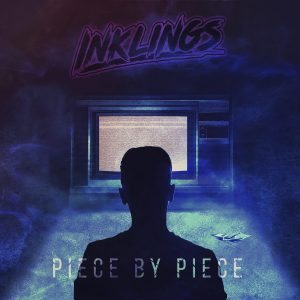 Inklings is Kier Kemp. Formerly vocalist for theatrical rockers FVK, Kemp created this new venture in 2016 shortly after that band split and a series of singles followed spread over the next few years. Now, debut EP ‘Piece By Piece’ sees Inklings announcing its arrival proper.

The project is on the surface pop-rock by numbers, keyboards as indispensable as guitars in building a package that recalls Set It Off, Thirty Seconds To Mars and the later work of All Time Low, among others.

FVK’s rawness and overblown emo is gone, but hereditary influences remain, ‘Holding Out’ bearing a staggering resemblance to My Chemical Romance’s ‘The Sharpest Lives’. That said, Kemp knows how to take a tune and remould it into his own, and he uses the soaring chorus to reflect on the unhappy end of his former band.

The moment ‘Piece By Piece’ really makes you sit up and take notice is ‘Let Me Know You’re Alright’. An electrified rocker that would fit in snugly among The Killers’ finest material, it is as unabashedly derivative as the rest of the EP but also certain to elicit an instant, irresistible release.

‘Ambush’, a perspective from within an abusive relationship, does largely more of the same but less convincingly – even with the verses laced with neat guitar string-bends and a shimmering shift to a middle eight straight out of the 80s.

Arguably most intriguing is closer ‘Answers’, a restrained lament of days gone by that combines piano and distant falsetto with a wonderful motif of circling keyboards and a drum machine. It seems to promise an explosion but becomes a case of less being more, the track impressive for its discipline.

‘Piece By Piece’ might be indebted to a wide spectrum of seminal pop-rock and emo, but Kemp sounds like he is creating something organic and self-driven nonetheless. Fans of any of those influences will find something here, and in turn they might just become Inklings fans too.

‘Piece By Piece’ EP by Inklings is out now on Marshall Records.