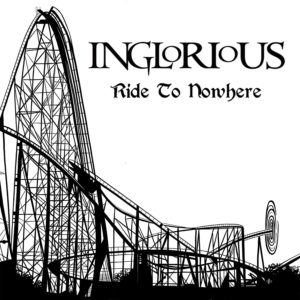 In December, Inglorious frontman Nathan James went on a rant following the departure of three members of the band, making some – shall we say – bold claims like “I’m a singer. I’ll sing anything anywhere and I promise you it’ll be really good”. Whatever followed something like that was going to be one hell of a ‘put up or shut up’ moment, and you would certainly hope that ’Ride To Nowhere’ can match up.

And to give him credit, he does have a good voice, but that’s about all that Inglorious have going for them, as ’Ride To Nowhere’ feels like any other dull-as-dishwater hard rock band that would have no chance if classic rock stations weren’t looking for newer bands to fit their demographic. In all honesty, that could be the entire review; from the very first track ’Where Are You Now?’, ’Ride To Nowhere’ amounts to little more than the same turgid, tepid pile-up of riff-rock banality that anyone would expect from a band like this.

It’s not totally irredeemable either, with the likes of ‘Freak Show’ and ’Liar’ bearing the customary examples of hooks that actually connect, but even then, there’s not a moment of this album that feels like Inglorious drawing on their own ideas. The pedestrian, low-energy plod is bad enough, but dig deeper into flimsy, uninspired balladry like ’Never Alone’ or the Alter Bridge-aping title track, and it’s hard to see where any greater appeal lies.

Sure, the veteran rockers struggling to find value in modern music might gravitate towards this in a pinch, but even in modern hard rock or retro-rock, Inglorious are lagging in a critical way. It’s certainly listenable, but for an album that runs too long and lacks any conceivable verve or spark, it’s hard to see what enjoyment can be gleaned here. Nathan James might talk a big game, but like the album’s title suggests, this ride is going nowhere.

‘Ride To Nowhere’ by Inglorious is out now on Frontiers Music.