Review: In Search Of Solace – Enslaved To Tragedy 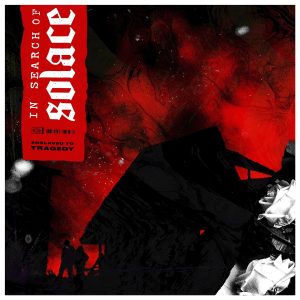 Based in Minnesota, In Search Of Solace released two albums before catching the attention of Sharptone Records. It’s not hard to see why. Their second album ‘Regression|Progression’ was an arresting blend of metalcore styles. With ‘Enslaved To Tragedy,’ they have tamed their wilder edges, aiming for a slicker more streamlined sound.

Leading single ‘Deathwish’ combines the band’s various flavours in its most satisfying form. A hard metalcore track laced with modern trappings. However, this is a varied album and not every song finds its niché. Presented as a patchwork of metalcore, songs either lean heavily on raw hardcore or an expansive djent sound. This leads to an uneven soundscape, especially as they only excel at the former. When they’re chewing through ‘Force Fed,’ it is really effective, but the whiny, lurch of songs such as ‘Survive’ make for an uncomfortable listen.

While there are no reckless excursions into rap this time, the band still has an experimental edge. ‘Survive’ is painted over a sweeping background canvas of synths. Similarly, ‘Left To Dust’ uses what sounds like a cloud of sinister hornets to shift and change the mood. However, it’s the brash, awkward unruliness of ‘Losing Touch’ where they’re at their best.

Vocalist Jonny LaDuke has an extremely powerful throaty scream. He shreds a path through uncomfortable opener ‘Culture Shock’ and sounds like an enraged torture victim on ‘Deathwish’. It’s a masterful performance. However, the same can’t be said for the counterpoint vocalist Nick Pocock. To his credit, he avoids autotune making for an honest, heartfelt sound. Notably ‘Path To Destruction’ really suits his talents. However, he isn’t a great singer and the soaring style he attempts on ‘Silent Voices’ and ‘Vacancy’ make listening to them a chore.

‘Enslaved To Tragedy’ has a powerful sound and a few killer tracks. When it’s fast and dirty it works well. Yet, when the band aim for a grander mainstream sound, things go awry. Ultimately, it’s disappointing and hard to recommend.

‘Enslaved To Tragedy’ by In Search Of Solace is released on 30th August on Sharptone Records.