Review: In Flames – I, The Mask 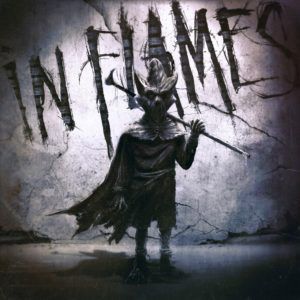 Bursting onto the scene way back in 1990, In Flames were one of the big players in the Swedish death metal scene. By the time ‘Soundtrack to Your Escape’ was released in 2004, they had largely left the pure metal sound behind, embracing the alt-rock elements, which have coloured their music since. New album ‘I, The Mask’ takes a step back and is a solid slice of accessible metal, perhaps not their most adventurous work, but with plenty to enjoy.

Returning producer Howard Benson helps keep the songs rounded and fleshed out, giving the record a familiar overall sound. It bites in the right places, accentuating the delicious crunchy guitar tones favoured by Björn Gelotte and Niclas Engelin. Again, Anders Fridén worked with a vocal coach and, while you still miss the sharp snarl of his earlier days, his singing voice is better this time around, mostly avoiding the awkwardness of recent albums. Despite fairly simple lyrics, the presentation is heartfelt, but he doesn’t always choose the greatest melodies, working best when he mixes together his various styles.

Kicking the record off in style, the opening suite feels inspired and powerful with forays into death metal territory. The title track and ‘I Am Above’ are gloriously old school, full of twisting riffs and aggressive vocals. Sadly, after such a formidable start, it’s a shame they can’t sustain the momentum and the midsection is dragged down by the drab ‘In This Life’. Wisely, it’s followed by the much heavier ‘Burn’ which grabs desperately at the sound of their early days, although it doesn’t quite grasp it.

Thankfully, closing tracks ‘All the Pain’ and ‘Stay With Me’ recapture the earlier magic. Throwing in an array of sharp ideas and great refrains that guide the album to a suitably epic conclusion.

So, while flashes of brilliance crackle through ‘I, the Mask’ overall it is a fairly safe outing. Good, but you know they can do better.

‘I, The Mask’ by In Flames is released on 1st March on Nuclear Blast Records.