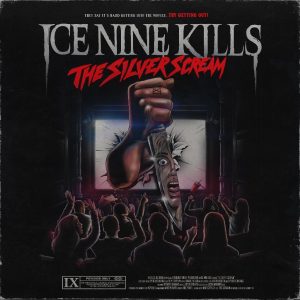 Horror and metal are two things that, in theory, should go hand in hand. Combining unsettling imagery with brutal musicianship is a terrifying mix – and one that Massachusetts’ heavy-hitters Ice Nine Kills have executed impressively on their new record ‘The Silver Scream’.

Taking a huge amount of inspiration from slasher films, haunted tales and the most common horror villains that are often seen out and about on Halloween, the group take an inventive, fun approach to conveying their horror stories through some terrific, if not disturbing songs. There’s the curse of Camp Crystal Lake (‘Thank God It’s Friday’), Nightmare on Elm Street (‘The American Nightmare’), and even a choppy, Jaw-inspired breakdown on ‘Rock The Boat’ that’s as enjoyable as it sounds. They’ve clearly invested a lot of thought in this project, having released a couple of eight-minute, short films to compliment ‘A Grave Mistake’ and the aforementioned ‘Thank God It’s Friday’.

Of course, it’s to be expected that a record basing its existence on horror movies will carry with it a fair bit of cheesiness. Voice-clippings tucked in to almost every track, lyrics that on any other album would feel intensely cringeworthy, and even an impression of Pennywise the Clown on ‘IT Is The End’. Yet here, they’re all forgivable, as they add to the immersive, dramatic nature of the album, and that’s a mean feat to pull off on its own. Even the instrumentation beefs up the theatrics, with strings, synths and all sorts of well-thought-out riffs and pulled sound effects emulating the movies they owe their creation to.

‘The Silver Scream’ has no right to be as fun as it is but boy it is fun. Each song has you listening closely for film references, throwback lines and thrashing, innovative melodies that all come together to make this record a truly cinematic listen, without taking itself too seriously at all.

‘The Silver Scream’ by Ice Nine Kills is released on 5th October on Fearless Records.