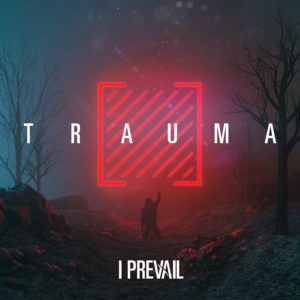 It’s difficult to have an identity crisis if you never defined who you are. I Prevail made their name with an “easycore” cover of Taylor Swift and their debut album couldn’t decide what it wanted to be, one song totally different from the next. ‘Trauma’ suffers the same problem, it’s like they’re moving away from their roots without ever defining what those roots were. Hence, it’s an awkward, uncomfortable journey.

Kicking off with easycore, ‘Bow Down’ is the heaviest song they’ve written, all wrapped in a whirring synthetic sound and chopped up production. Smooth choruses come wooshing in and then, weirdly, it wanders off into a synthscape before plonking in another heavy section. It’s an electro-metal mess and it’s the whole record in miniature.

Ideas are flung around to see what sticks and even if they do, it’s too late because the next one is barging it out of the way. At best you get a stuttery R&B song in the vein of Emarosa, at worst you end up with the swirly-whirly dubstep soup of ‘Rise Above It’.

Under the guiding hand of producer Tyler Smith, the sound is slick, but the songs heavily rely on his input. Disparate elements are spliced together under the misapprehension that pasting in a smooth chorus will solve everything, and to be fair, sometimes you don’t notice how hollow and jarring the whole thing is.

Songs like ‘Every Time You Leave’ thrive on huge hooky choruses and Brian Burkheiser’s voice is bright and glossy, but despite a near career-ending vocal injury, he doesn’t play on fragility. Instead, he smothers himself in autotune until he sounds as heartfelt as an early build of Siri.

I Prevail’s defining characteristic is hyperactivity, rushing to show off sparkly prizes at the expense of depth. ‘Trauma’ is the sound of a band stumbling around trying to find an identity, ending up with a tonne of slick ideas, a handful of choruses and nothing else.

‘Trauma’ by I Prevail is out now on Fearless Records.