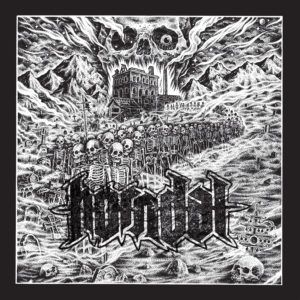 Nestled in the midst of the Swedish woodland lies a town named Horndal. Once a small industrial centre, the steel mill providing the source of income for many inhabitants was shut down in the 1970s. This event has inspired the band of the same name to compose an album that encapsulates the rage of many losing their only source of income. ‘Remains’ paints a vivid picture of the despair of those losing everything by combining driving riffs with vocals that spit with fury.

Horndal’s debut starts with ‘Wasteland’, which depicts the barren remains left by the mill’s closure. The track starts out with attention-grabbing guitar stabs, which then boil down to a chugging riff.

Throughout ‘Remains’, tracks such as ‘Factory Shutdown’ and ‘Rotting Town’ stir up a sense of spiralling despair, leaving you on edge. ‘Hin’ shows Horndal‘s ability to create short tracks that still contain the ferocity shown on the rest of ‘Remains’. At just under three minutes, ‘Hin’ grabs the listener with a vocal and instrumental explosion.

Horndal also uses dynamics in an effective way, giving the listener differentiation in intensity. This is evident in tracks such as ‘Fornby Klint’ and ‘The Horndal Effect’, as they use a rise and fall effect in order to make the heavier parts sound even darker. If the tracks had even more variation in intensity, it would make the overall experience more engaging. While listening to ‘Remains’ from beginning to end, the experience is relentlessly harsh, yet the blow could be softened by using more contrasting dynamics.

On the whole ‘Remains’ is a spectacular punch to the face. The album really captures what it intends to and portrays a real and raw sense of anger. ‘Remains‘ is a debut that shows Horndal has more to offer.

‘Remains’ by Horndal is released on 22nd February on Prosthetic Records.