Review: Homebound – The Mould You Build Yourself Around EP 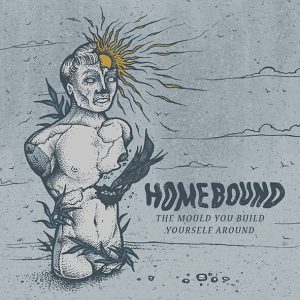 With the “pop-punk revival” firmly here to stay, Surrey quartet Homebound return with their third EP – ‘The Mould You Build Yourself Around’. While it doesn’t quite reinvent the wheel, there is still enough for them to stake their claim amongst the ever-growing UK pop-punk bubble.

The EP opens with the half-timed grooves and distorted rhythmic guitars of lead single ‘Headspace’; an anthemic punk tune about relationship turmoil, an overlying theme amongst many pop-punk bands. Its vivacious bridge coupled alongside shrill riffs present the song it’s justified climax. ‘Pensive’ hits you with an onslaught of ferociously fast-paced riffs and energetic rhythms, but encompasses some of the finer melodic work of the Farnham punks. The track is structurally loose, and it engrosses you with its unpredictability, keeping things speculative throughout. Charlie Boughton’s abrasive vocals are ever present and full of character, his performance is a real highpoint across all of the tracks on offer here.

As you dig deeper into ‘TMYBYA’, there are signs of Homebound flexing their versatility. ‘Distrait’ hints at increasing maturity in their songwriting, yet the contagious hooks and sparkly riffs remain, albeit darker. While ‘Sonder’’s chorus is so ridiculously catchy, you’ll be racking your brain for days just trying to forget it.

On record, Homebound stick to the pop-punk formula, but with EP closer ‘Broken Reverie’, they have potential to shine in a live setting. With its bouncy energy and mid-point breakdown, it rounds off the EP on a high.

‘The Mould You Build Yourself Around’ isn’t exactly ground-breaking. But every coarse vocal melody that leaves Boughton’s lungs is genuine and heartfelt, and each track possesses enough diversity amongst its selection that it doesn’t feel laborious. Homebound are a band in the midst of finding their definitive sound and, with ‘TMYBYA’, you feel they’ve culminated the perfect balance of fresh ideas alongside the sense of familiarity that comes with the genre.

‘The Mould You Build Yourself Around’ EP by Homebound is released on 10th February on Rude Records.