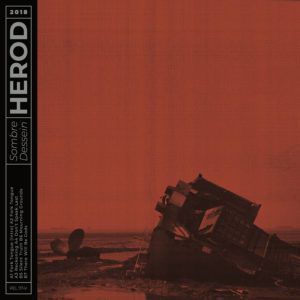 Switzerland isn’t a country that has cultivated many successful metal acts over the years. Having said that, one such addition could be Herod, a band that is gradually hammering people’s skulls in with monstrous riffs and chop-change polyrhythms. With a concept based around the downfall of the world, ‘Sombre Dessein’ is packed with music that strikes fear into the hearts of those that listen.

Opener ‘Fork Tongue’ is a flurry of dissonance: the enraged guttural screams marry well with the sprawling riffs and articulate drums that give us an insight into Herod’s soul-crushing sound. Bill Steer of Carcass is on hand to provide a concise flair to the piece; a solo that isn’t complicated but adds depth and character to the track.

‘Reckoning’ starts off as a bog-standard Djent song, something that lacks any originality – or so you think. The jarring mix conveys an aggressive feel, and the clean break keeps the listener holding on by a thread with a brief display of soft vocals until shouting erupts from the bowels of hell.

‘Don’t Speak Last’ starts the listener off in a weird dream state. The body and mind both lull to the shimmering guitar line and the tribal drum rolls. A dizzying frenzy ensues on ‘Silent Truth’ – the disposition of this track is a welcome change, flowing in and out of brutal metal music and sombre passages of melody that are seemingly impossible to understand, but the urge to go with the flow and headbang along is inescapable. The inevitable finale arrives in ‘There Will Be Gods’, a lengthy battle of painful screams, chunky guitar lines and booming drums that pummel you one last time – a painful end to this gargantuan LP.

If Gojira suddenly decided to start making Djent music then ‘Sombre Dessein’ would be the result – something so utterly nightmarish that you won’t sleep for weeks. If we were to witness the end of days then this album would be a perfect soundtrack to the declination of all that we know.

‘Sombre Dessein’ by Herod is out now on Pelagic Records.