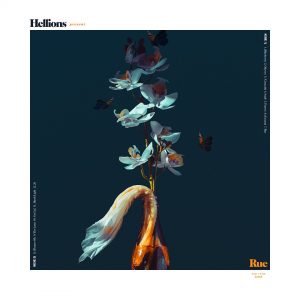 Australia’s Hellions have been a band under constant evolution. From their early inception following the break of hardcore punk outfit, The Bride, through three of their own albums, the band have become a staple of the Australian heavy music scene. Their last release, ‘Opera Oblivia‘, could easily have been considered the band’s magnum opus, a concept album touching on themes of ageing, self-doubt, and corruption. A near untouchable album within hardcore punk, if it were to be a movie, then ‘Rue’ would be its sequel.

The movie analogy is not too farfetched, as the album is littered with theatrics, from the circus-themed interludes to almost fantasy-like melodies scattered throughout the album’s runtime. While some of Dre Faivre’s harsher vocal performances are left in the rear view mirror, the crunch of the instrumentals is not, with Matt Gravolin and Josh Campiano delivering some powerful riffs and imaginative progressions.

‘Rue’ builds on some of the concepts put forth on ‘Opera Oblivia’, and is more of a dichotomy between self-worth and self-doubt. ‘X (Mwah)’ perfectly exemplifies this, with lines like “I’m in the twilight of my prime” and “If Freddie wrote his Rhapsody at 29/Then maybe I still have time for mine”. The song ‘Smile’ also clings on to hope, emphasising the importance of a positive mental attitude. It’s moments like these that separate and propel ‘Rue’ away from ‘Opera Oblivia’, an album that seemed much more negative in comparison to its successor’s sense of hope.

Some of the more interesting moments here are the callbacks to ‘Opera Oblivia’. ‘The Lotus’ is a clear follow-up to ‘Lotus Eater’, and there are some recycled riffs implemented as leitmotifs to evoke a response from the listener.

Ultimately, ‘Rue’ goes far beyond anything the band has put out previously. Hitting the ground running following the success of ‘Opera Oblivia’, Hellions have crafted a genuine work of art that perfectly captures the world context in which it was written, while remaining a personal outlet for the artists that made it.

‘Rue’ by Hellions is released on 19th October on UNFD.