Review: Heart Of A Coward – The Disconnect 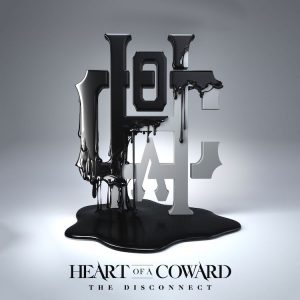 Heart Of A Coward have had a turbulent few years. After releasing three hard-hitting albums of technical metalcore, they split with vocalist Jamie Graham and disappeared on hiatus in 2015.  With a new vocalist and a new label, ‘The Disconnect’ ends their silence. However, while they have been away the musical landscape has changed somewhat and they’re having to work hard to stand out.

Good news, it’s a strong comeback. They’re hitting hard and haven’t lost their love for big groove riffs. Guitarists Carl Ayers and Steve Haycock trade powerful blows on every song. They’re never content to stick to one sound either, using lead lines on songs like ‘Ritual’ to add an extra dimension. Of course, they can’t resist a big breakdown, but they’re used sparingly and each one counts. With Justin Hill and Will Putney handling production, the riffs sound enormously beefy while avoiding being overly slick.

Vocalist Kaan Tasan caused a bit of a stir when he joined. He sings and screams in a more accessible style to his predecessor, which alters the band’s overall sound. Likewise, he’s more versatile, which allows the band to try different things. Notably, the expansive ‘Culture of Lies’ feels like they’re stretching their wings. ‘Return To Dust’ also offers a change of pace, but it never becomes more than an interlude, despite threatening to. In fact, although they flirt with big ideas, they never really push themselves when it’s clear they’re capable.

With Architects dominating the technical metalcore scene, you can’t avoid direct comparison. To their credit, Heart Of A Coward mostly avoid going toe-to-toe. However, at times, notably ‘Suffocate’, the choice of vocal and guitar sounds like a carbon copy. Thankfully, they’re strong enough to hold their own, but by not pushing their unique elements they hold themselves back.

As an attempt to re-establish themselves ‘The Disconnect’ is a solid, confident expression of their sound. It’s a good record, but it’s a shame they didn’t aim higher.

‘The Disconnect’ by Heart Of A Coward is out now on Arising Empire.