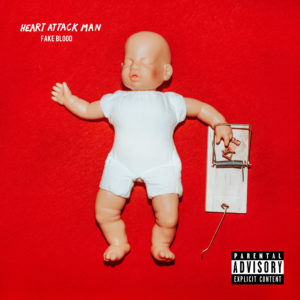 As common as it is for emo and indie-punk bands to be showered in hype that, given their homogeneity, is rarely justified, there’s much more behind Heart Attack Man. For one, they’re a bit more experienced in the scene having already had a few releases under their belt, but last year’s split with McCafferty saw them really coming into their own as a standout presence within modern emo, something that’s only been building in the lead-up to this sophomore album.

The wait has most definitely been worth it too, as ’Fake Blood’ really does hit with the sort of force that could see Heart Attack Man picking up huge amounts of traction. It’s not that far removed from the more traditional emo fare, but rarely has a band sounded this fired-up when contorting their vision to resemble a more direct, snarling brand of 2000s post-hardcore. But even then, it all feels totally natural; ’Blood Blister’ might channel The Used in its whirlwind flurries of tense fury, but it remains a natural fit next to the likes of the methodical grunge stomp of ’Rats In A Bucket’ or the bass-driven snapping of ’Crisis Actor’.

It helps that Eric Egan is the sort of vocalist who can convincingly channel a venomous sneer. When paired with a sound that’s not afraid to indulge in manic, frenzied passages to really emphasise its rawness (see the blunt but brilliantly executed anger of ’Sugar Coated), it’s one of modern emo’s most compellingly forceful albums in some time. Couple all of that with a production style that lets the guitars roar without having to slather them in fuzz to simulate the effect, and Heart Attack Man realistically verge towards straight-up rock in just how much power they’re able to pack in.

And that’s entirely complimentary as well. Transcending emo’s ceiling is not an easy task, but the spark in Heart Attack Man is undeniable, and ’Fake Blood’ is where it’s really crystallised into something excellent.

‘Fake Blood’ by Heart Attack Man is released on 19th April on You Did This Records / Triple Crown Records.