Review: He Is Legend – White Bat 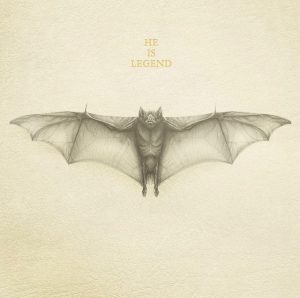 Touted as one of metal’s most under-appreciated bands, He Is Legend‘s sixth outing, ‘White Bat’, enhances that reputation with a concept involving a fictional killer who’s battling their own demons. Wrapped in a ball of sludge n’ roll, He Is Legend have never sounded so menacing.

‘White Bat’ starts with a brilliant onslaught of noise as the title track pairs heavy guitar stabs with driving drums, and tops it all off with fast paced vocals. The powerful build leads to an effective crescendo making full use of Schuylar Croom’s roaring vocals.

It’s clear early on that the quartet are in full swing. ‘When The Woods Were Young’ thrives with hectic and positive energy as relentless vocals and riffs are relieved by melodic breaks with satisfaction. While the anthemic ‘Eye Teeth’ delivers a heavy punch in the face and is sure to become a live favourite.

Throughout ‘White Bat’, He Is Legend repeatedly deliver ragers; from the Southern swagger of ‘Burn All Your Rock Records’ to the meaty chugging of ‘Boogiewoman’.

By ‘Talking Stalker’, the North Carolina band momentarily rein things in with a desert-soaked intro that gives way to a rollercoaster of riffs. It’s a trait that follows on ‘Bent’ and ‘Resister, Resist Her’ with the former seeing Croom’s vocals soaring above.

He Is Legend also proves their ability to write stirring ballads. ‘Uncanny Valley’ brings the mood down with its grunge-esque tone. Whereas ‘The Interloper’ harmoniously drifts, highlighting their melodic side. Together they bring welcomed variation.

‘White Bat’‘s full-throttle approach, along with the occasional breather, makes it a career highlight for He Is Legend. Add to that the dark narrative undertone, and you’re left with a compelling and pleasurable album.

‘White Bat’ by He Is Legend is out now on Spinefarm Records.