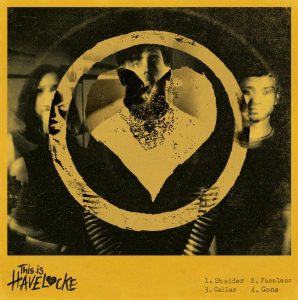 Sheffield punks Havelocke have titled their debut EP, ‘This Is Havelocke’. If that’s not a statement of intent, then we don’t know what is. With the goal of introducing themselves and their brand of hardcore punk, they have issued a four-track EP that aims to set a benchmark for the quartet.

Opening track ‘Shudder’, despite being explicitly punk, is the most memorable track on the EP without a doubt. With a hook you’ll be singing that hook for days, the mix of unclean and cleans vocals gives the song the hardcore punk edge, and it works like a charm. ‘Faceless’ follows and, with a riff as infectious and memorable as this, it’s no wonder this was single material. Havelocke are harnessing a punk-meets-metal sound and it’s refreshing, unique and truly exciting.

The following two tracks, ‘Cellar’ and ‘Gone,’ harness a harder and more complex sound. The former begins like an early 2000’s post-hardcore album opener, eventually giving way to a less crunching riff and some screamed vocals. However, the riff gets crunchier, the vocals get cleaner, and this hard-hitting song again brings Havelocke back into that “catchy as hell” box. At times it sounds like Silverstein, and that’s no bad thing.

Closer, ‘Gone’, is an expression of anger and distress that, like its predecessor, has a more complex structure and time changes that make it much different to the more accessible openers. Nevertheless, it’s perfect for fans of the more hardcore end of the genre.

Without doubt, the EP is successful in what it sets out to do, introducing the many faces of Havelocke. However, the main failing of this comes in the number of tracks. At only four, it does feel like a lot of ideas have been thrown in to get a particular sound or influence onto the EP, rather than because they belong. Still, it’s a strong group of tracks, and certainly a highly recommended listen.

‘This Is Havelocke’ EP by Havelocke is out now on Just Exist.