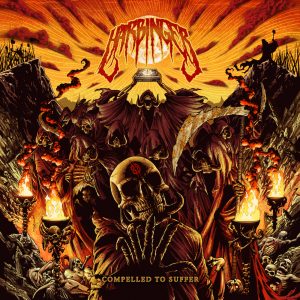 On paper, Harbinger sound like a band that really shouldn’t work. The comparisons they’ve received have spanned tech-metal to deathcore and slam, styles that really couldn’t be further from each other in terms of musical ambition. That’s not to say it can’t work though, especially if the band are able to find a cohesive way to collate the influences in an effective way.

And in general, ’Compelled To Suffer’ does just that, albeit in a way that greatly streamlines each element in a way that tones down any truly distinct features. Really though, that feels like a necessary concession that had to be made; a busy, overly bloated could’ve been a reality, and yet, Harbinger bring such disparate influences together with ease. Just take opener ‘The Awakening’, in which the searing, intricate guitar lines remain present, but rather than being overlaid with little subtlety, they’re interwoven among pummelling deathcore violence and Tom Gardner’s larynx-shredding roars.

Admittedly, it’s a thrill that does get rather run into the ground in time, particularly when there’s not a great deal of modulation among these thirteen tracks. However, one thing that ’Compelled To Suffer’ constantly excels in is technical proficiency. On a purely instrumental level, it’s virtually impossible to fault what Harbinger do here, such is the detail with which explore these winding passages and compact them into manageable courses of brutality. This feels like the ideal path for this band to take, and even if it doesn’t always hugely stand out, they truly make the most of their abilities through and through.

It’s why, to the right crowd, ’Compelled To Suffer’ could be potential album of the year material without question. It’s ridiculously heavy, the technical side feels tastefully integrated, and Harbinger manage to keep a solid level of consistency throughout. It’s just a shame that things can repeat and lose steam pretty easily, but for an interesting metal prospect regardless, it’s definitely worth a look.

‘Compelled To Suffer’ by Harbinger is out now.