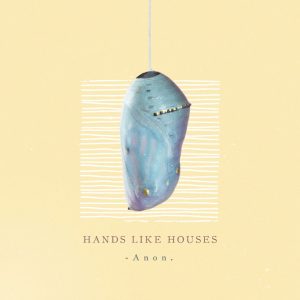 Australia has produced some solid rock acts over the past few years, and Hands Like Houses are up there with the very best the country has to offer. As a move to their new label Hopeless Records marks an important change in the group’s career, their fourth album ‘-Anon.’shows them diving headfirst into new ground, embracing a broader scope of genres, while perhaps watering down their older sounds in the hope that more may flower from its roots.

As soon as fans heard the single ‘Overthinking’, it was clear that ‘-Anon.’would show an abandonment of their regular heaviness and, showing instead a favouring of pop-inspired, rhythmically-groove dependant beats, that are delicately littered with punchy riffs, and elevated by shimmering electronics. It’s evident right from the album’s start, with ‘Kingdom Come’ being a somewhat mellow, hip-hop/rock blended intro that eases listeners into the record’s overall feel.

At other times, the experimentation is a little less successful. ‘Through Glass’seems to offer little, dreamily plodding along with glossy, if not forgettable melodies, while tracks like ‘No Man’s Land’ and ‘Half-Hearted’ are heavier, but fit the same mould. Not bad songs by any means, but they just fail to stand out and feel a bit ‘radio-friendly rock’.

Where the album does pack a bit of grit is on tracks like ‘Monster’, with its new-Bring Me The Horizon vibe, and on ‘Tilt’and ‘Black’. The latter is arguably the heaviest we get on the record, with a bruising finale that finally sees vocalist Trent Woodney fully pulling his much-desired screams from his lungs.

What Hands Like Houses have created on ‘-Anon.’ is a record that aims to push their confident hard rock forward, dipping their toes (if not their whole foot) into new elements of pop, hip-hop and electronics. While it isn’t totally convincing all of the time, when it does work, the record shows a disparity of genres and a refreshing mini-reinvention of the band’s sound.

‘-Anon.’by Hands Like Houses is out now on Hopeless Records.