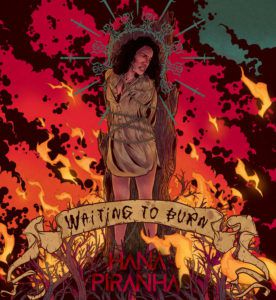 Dark and twisted, ‘Waiting To Burn’ plays with themes of witches being burnt at the stake and other macabre topics. With the use of traditional classical instrumentation, such as violins, paired with hard rock, Hana Piranha creates an interesting sound.

‘Silk and Poison’ starts the album as it means to go on as violins merge into classic rock riffs and spitting vocals. The verses crescendo into an explosive chorus, with a powerful performance from Hana. Stripped back verses feeding into a heavy chorus is a trope that is used throughout the album. Likewise, ‘Naked Flame’ consists of simple instrumental parts in the verses, followed by heavier instrumentation in the chorus. This effect is great, but only when used in moderation. By the middle of ‘Waiting To Burn’, it’s almost expected to hear muted guitars in the verses followed by a heavy chorus.

Hana Piranha have taken inspiration from a number of different genres. ‘Amateur’ carries itself with a pop punk vibe, using simple but punchy guitar riffs and drum beats. While ‘Paper Doll’ hints at a grungy sound, with a 90s inspired guitar riff.

The use of violin on this album gives some songs a symphonic feel, but it isn’t executed in the best way. Tracks such as ‘Murderess’ have violin solos, and though this sounds cool and different, it is an element of the band that could be explored more.

The themes explored on ‘Waiting To Burn’ are mundane and lack any depth with nothing really threading it together. It’s not benefitted by predictable song structures that are also used to death, such as the stripped back verses followed by heavy choruses.

Overall, the album has a lot of promise, especially with the combination of violins of heavy rock riffs, although not entirely inventively executed. It would be much more interesting for Hana Piranha to develop their own songwriting conventions, rather than relying on common ones.

‘Waiting To Burn’ by Hana Piranha is released on 22nd March on Fourglove Records.