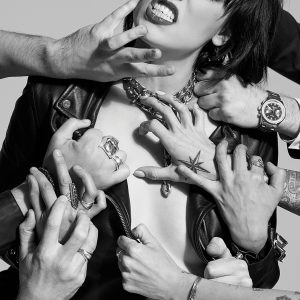 Halestorm have worked hard with almost constant touring to reach the levels of success they’ve already achieved, and the fourth outing from the Pennsylvania quartet looks set to cement their already enviable position. However, ‘Vicious’ is no radical departure and they are most definitely playing it safe as they further hone their craft in the realm of pop-metal, rather than exploring their heavier side. Nevertheless, as hook-filled hard rock goes, they are so well-drilled they can’t help but deliver.

‘Black Vultures’ kicks it all off in killer style with a big riff and an even bigger chorus; it’s slick, it’s melodic and rocks in every department. This is about as good as radio-friendly hard rock gets and is a strong indicator of just how polished Halestorm are.

There is plenty more on the pulsating rock front with the hectic ‘Uncomfortable’, the disposable hard rock of ‘Buzz’ and the dirty talk of ‘Do Not Disturb’, which is totally overblown but boasts a wicked groove.

However, having tasted high-level chart success, it’s clear that they are intent on going even further, given the heavy pop leanings underpinning a number of tracks. ‘Skulls’ has a real dark pop edginess; Lzzy’s rapid-fire delivery showing versatility. While songs such as ‘Painkiller’ and ‘White Dress’ showcase their chart-topping pop nous without skimping on the guitars.

There is also a pretty liberal splattering of ballads, with the laid-back acoustics of ‘Heart of Novacaine’ and album closer ‘The Silence’, besides the slow boiling ‘Killing Ourselves to Live’, which bursts into life with a smoking solo and running riff after a quirky midsection.

It’s stunning just how good Lzzy Hale’s vocals are on this record as she fully explores both ends of her extensive range, and despite not exactly breaking new ground, ‘Vicious’ is extremely easy on the ear and is the sound of commercial hard rock at its best.

‘Vicious’ by Halestorm is out now on Atlantic Records.