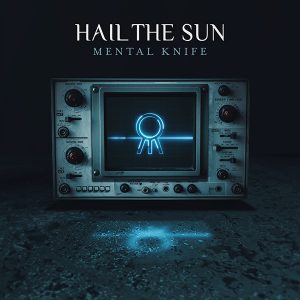 As the gentle introduction ‘Gouge & Uproot’ explodes to life, you realise that on ‘Mental Knife’, Hail The Sun have pushed their sound to its zenith.

Always flowing, the album is a soundscape of dual effects-laden guitars dancing on a background of thunderous drumming. Multi-talented singer (and drummer) Donovan Melero has a voice able to convey the serenity of floating over the ocean. It can roll like the waves, then suddenly switch to a screech like an attacking flock of seagulls. It’s a stunning mixture of skills, especially as he knows when and where to deploy each for maximum effect, finding big hooks in transitions and unusual emphasis that fans of Circa Survive (or indeed Sianvar, Melero’s side-project) will recognise. Producer Beau Burchell (Saosin) deftly handles the band’s disparate elements, enhancing the overall journey. Compared with the band’s 2017’s EP ‘Secret Wars’, he chamfers off the sharper edges while retaining the bite.

First single ‘Mental Knife’ shows how far the band have pushed themselves, featuring frantic sparkling guitar lines, a brilliant yelped hook and calm-before-the-storm lulls (again, similar to Sianvar). Just listen to the guitars on ‘Suffocating Syndrome’ working together by doing different things. One channel is a cacophony of guitar abuse while the other weaves delicate lead lines around it: genius. ‘The Stranger in Our Picture’ was a weak single choice – the band don’t do choruses and its gentle flow doesn’t draw you in – yet fits perfectly as part of a larger whole. Similarly calm, ‘Risk/Reward’ features a delicate vocal over a gentle swirl of guitar effects, offset by oblique lyrics about eyes being gouged, enhancing its awkward beauty. ‘Feel It When Convenient’ follows as a counterpoint, displaying a violent screechy enfilade and the album’s heaviest parts. A highlight, ‘A Lesson in Lust’ excels with a vocal groove, rapid lead guitars and more than enough changes to justify their ‘progressive’ label.

‘Mental Knife’ by Hail the Sun is released on 28th September on Rude Records.