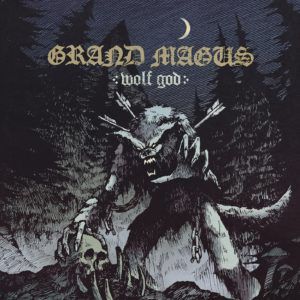 Grand Magus are back with their ninth studio album, ‘Wolf God’. Exploding with riffs and epic vocals, the album is an adventure fraught with tales of beasts and warriors. With anthemic and powerful tracks back to back, ‘Wolf God’ is much like a soundtrack to accompany a mythological wanderer.

The first track, ‘Gold and Glory’, is a short instrumental piece that would not sound out of place in a fantasy film or video game, and as such brings that feel to the album. From this laid back start, there is a brutal transition from strings to ‘Wolf God’. The titular track asserts itself with chugging guitar riffs and war-like drums. ‘Wolf God’ starts as it means to go on, as it sets the bar for the rest of the album.

‘A Hall Clad In Gold’ follows on the mythical theme, with the topic of where worthy warriors go when they die. This track is an epic war cry, with the drums, bass, and guitar fitting with the vocals well. The chorus on this track also lends itself to the crowd chanting back.

‘Spear Thrower’ and ‘Untamed’ show a more thrash metal side to Grand Magus. Instead of slow and punchy riffs, the tracks provide the listener with rapid, mosh-worthy instrumentation. ‘Glory To The Brave’ teases a stylistic departure with a very relaxed beginning, yet the familiar big riffs don’t take too long to make their return. It might have been interesting to make that introduction longer to have more differentiation though.

As much as ‘Wolf God’ is an album full of anthems, it has the problem of sounding slightly repetitive. By the fourth track, ‘Dawn Of Fire’, the riffs used starts to sound familiar. It would possibly be better for Grand Magus to experiment with different instruments, dynamic feel and rhythms. This would make the album a bit more unique.