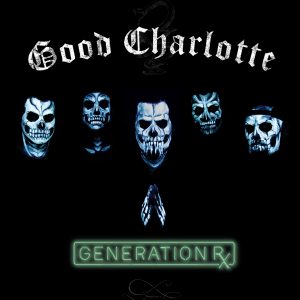 Good Charlotte’s dual frontmen, Joel and Benji Madden, may have broken out with a song that maligned the rich and famous lifestyle, but they certainly embraced it. From being judges on a reality TV show to marrying celebrities to releasing a separate side-project. Nevertheless, since returning from hiatus in 2016 with ‘Youth Authority’, Good Charlotte have had their work cut out to stay relevant up against younger bands who tread similar sonic ground, such as Waterparks. To this end, new album ‘Generation Rx’ tackles a topic everyone can relate to – death.

From the off, it’s a genuine surprise to hear the band so surefooted. Just listen to ‘Shadowboxer’ with its one-two punch of a chorus or the simple effectiveness of ‘Prayers’. Gone are the honking keyboards and suspicious rap experiments.

With only nine songs, there’s no space for filler. Don’t think this is a total reinvention, this is a Good Charlotte record, warts and all. You’re not getting any deep philosophical musings, but the darker focus reaps rewards. Similarly, Benji Madden and Zakk Cervini co-produce in a winning combination. As you’d expect, during the verses guitars and drums drop in and out with layers of synths providing a canvas, but it’s done skillfully.

Sure there’s all sorts of electronic trickery is going on, but they don’t forget their birthplace – punk. Hence, the instruments have a real heft (particularly on ‘Self Help’) and even the slower ‘Cold Song’ avoids sounding flaccid. Throughout Joel Madden is genuine and heartfelt, to the point that Architects’ Sam Carter’s guest vocal on ‘Leech’ doesn’t really add anything extra. And yes, the lyrics on ‘Actual Pain’ are a bit cringy, but the delivery sells them. Only ‘California’ breaks the mould, closing the record on a brighter note.

Good Charlotte bite with ‘Generation Rx’. A mature, focused record, proving they can still be relevant.