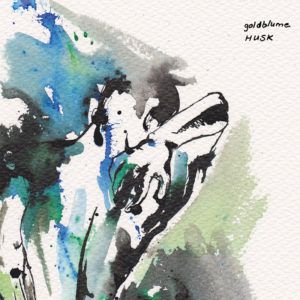 Keen to experiment, Cambridgeshire band Goldblume shovelled math-rock, grunge, punk and alternative rock into a concrete mixer and out came their debut record ‘Husk’. Think of it as a piece of rocky road; a chocolatey base with chunks of biscuit, marshmallow and nuts. Giving you plenty to chew on, but with an unpredictability so you’re never sure what the next mouthful will bring. Yes, it can be satisfying, but also a bit lumpy.

When the three-piece say the songs “didn’t come easily” you can understand why.  Randomness is all well and good – see the band’s key influence, Pixies – but making the songs feel natural is tricky and for the most part, the band do this well (Remember Engerica? Imagine their record without the tongue in its cheek). You can’t fault ‘Tomorrow’, the big riff driven ‘Fiendish’, almost-ballad ‘Alice’, or the focused guitar work of ‘We All Know Why And Who’ but there are other parts that don’t slot together so well.

To the band’s credit they self-produced and mixed ‘Husk’ themselves, but because of its Surfer Rosa stylings, it might have been wiser to ask an outside hand to guide their ideas or file off the edges on a few unusual and irksome stylistic choices.  For every ‘Razor’, where interlocking riffs come flying from left and right, there’s a moment when a few tweaks wouldn’t have hurt.  For example, different vocal styles are used throughout, some more effective than others. At times they’re distractingly echoey or disjointed.

The album closes with the three-part ‘Loose Fruits’ suite, a mixture of weird, draggy and awkward sections. While lyrics are often to personal taste, on ‘Loose Fruits Part 1’ they’re presented in a way that’s difficult to digest. Maybe in a different context they wouldn’t be so jarring. Thankfully the second part jettisons the vocals and becomes a satisfying riff-fest, leading to a far more solid conclusion.

‘Husk’ is an interesting, cohesive record of peaks and troughs and a promising step in Goldblume’s career.

‘Husk‘ by Goldblume is out now on Aaahh!!! Real Records.