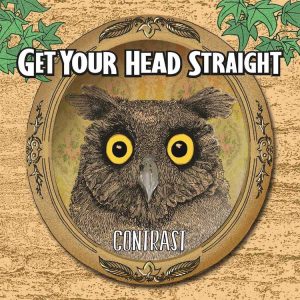 With ‘Contrast’, Milton Keynes pop-punkers Get Your Head Straight are looking to capitalise on the start of your summer. Their sunny, major-key tunes are fairly straightforward, but undeniably bouncy, energetic, and – most importantly – fun.

The unrelenting positivity of GYHS’s sound is combined with their impressive knack for catchy choruses. From the opening song, ‘Excuses’, it’s clear that their strengths lie in crafting sun-drenched earworms, which are guaranteed to get stuck in your head for hours on end. It cannot be denied that the band possess a deep understanding of their genre, and there are nods throughout ‘Contrast‘ to modern groups such as Neck Deep and State Champs.

Unfortunately, it’s not likely that songs like ‘Swansea’, ‘Two Sided’, and ‘Posture’ will make too much of an impression on anyone who isn’t so deep into the genre, they have pizza coming out their ears. The squeaky-clean production job and lyricism concerned with relationship struggles might convince teens decked out in flannel, but this formulaic approach to modern pop-punk is arguably overdone. It may mean that the band find it difficult to break through into the limelight.

The final two tracks, on the other hand, see some more interesting ideas at play. ‘Medusa’ is a slightly slower-paced (and more well-considered) track, as pop-rock sensibilities are combined with chugging guitars and an enjoyable solo. It’s potentially the best song on the EP. The closer, however – ‘Consider’ – is a slightly messy attempt to mimic easycore giants such as A Day To Remember. It seems that GYHS are far less comfortable when they veer off from the tried-and-tested tropes of modern pop-punk.

Trading on big pop hooks and well-executed, upbeat instrumentation has the potential to get Get Your Head Straight some attention in their insular scene. However, this EP still probably won’t stand out amongst its peers to a casual listener.

‘Contrast’ by Get Your Head Straight is out now.