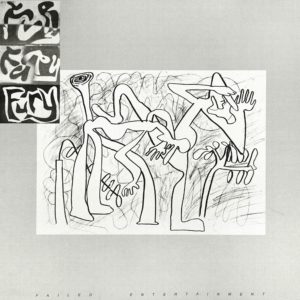 For as much of an onus is placed on social media as a necessity for bands to get themselves out there, it’s a ballsy move for California’s Fury to eschew those practices entirely. It’s certainly effective in harking back to the DIY ethos of classic hardcore, but it puts a total emphasis on the music and means that quality is even more of absolute necessity.

And even if they’ve not quite forged a truly unique path for themselves, ’Failed Entertainment’ does have enough in the way of standout moments to click on its own merits. That’s made rather clear right from opener ’Angels Over Berlin’, with a jagged yet distinctly melodic riff making way for Jeremy Stith’s vocals that absolutely ooze with swagger. This is hardcore taking its cues from the groove and smoulder of the ‘90s, and just like Turnstile before them, Fury seem remarkably adept at giving that style a modern punch-up on tracks like ’Inevitable Need To Reach Out’.

Of course, to carry on in that vein would be to pit this album against Turnstile’s knack for colour and flair, and that’s a battle that even the most seasoned of hardcore acts would struggle with. Fury are no different, but it’s not a case of not trying, as the more direct flurries of ’America’ or the tense, metallic surge of ’New Years Days’ show. They’re definitely getting there as far as capturing that vibe goes, and with a bit more refinement and diversity thrown into the mix, they’re bound to reach it.

Right now though, ’Failed Entertainment’ is a remarkably robust and satisfying listen, and one that opens a lot of potential avenues going forward. Fury aren’t exactly revolutionising the sound, but doing enough to open things up while simultaneously hitting with direct, straightforward force is still worthy of commendation. Especially for what could be dismissed as ‘just another hardcore band’, there’s a lot to like about this one.

‘Failed Entertainment’ by Fury is released on 3rd May on Run For Cover Records.