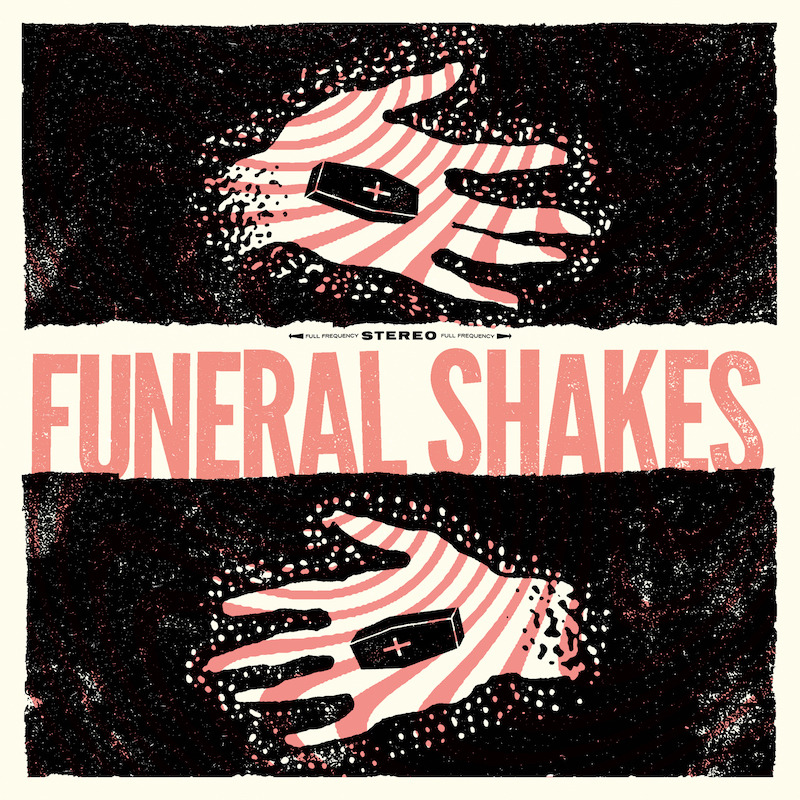 Heartbreak, sorrow and gloom are some of the worst emotions we can experience as humans, but in the hands of the right person, those emotions can be turned into spectacular works of art. Former Smoking Hearts members Calvin Roffey and Simon Barker have had their fair share of struggles and grievances over the years, but it’s their ability to pick themselves up and move forward that fuels the inexplicable euphoria of Funeral Shakes’ self-titled debut.

With a line-up completed by Nervus’ Em Foster and Gallows drummer Lee Barratt, Funeral Shakes specialise in the rough-and-tumble of 1960’s garage rock and perform with the energy and vigour of the best names in punk of the last fifteen years. ‘Over You’ opens the album with flourishes of razor-sharp punk riffs and battering drum arrangements completed by Roffey’s vocal delivery reminiscent of the sneer of Rocket From the Crypt.

In spite of the rawness that producer Steve Sears’ characterises this record with, Funeral Shakes operate with an undeniable slickness across these twelve tracks. Sudden bursts of vocal harmonies on ‘Circles’ and ‘Howl’ add a splash of noir sheen to the frailty of Roffey’s performance like makeup covering a bruise. Even lyrically, themes of bitterness, blame, and the mourning of dear friends are delivered via catchy couplets and iconic statements. One could easily picture ‘Gold Teeth’s’ refrain “I’ll just go until I find a place to lay my headstone” adorning future merchandise.

Funeral Shakes describe their mission statement as writing happy songs about sad situations, and this album allows it’s creators to vent their frustrations and woes, and also celebrate surviving said situations. While the commitments of its members to other bands suggests Funeral Shakes exists as a side-project, this album is as vital as any full-time artist’s output. This sets the bar exceptionally high for any punk release in 2018.