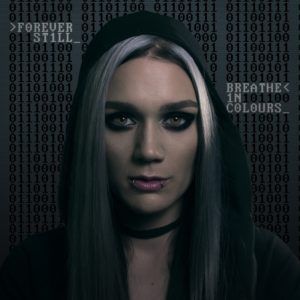 Forever Still is the partnership between singer Maja Shining and multi-instrumentalist Mikkel Haastrup. Since releasing their debut full-length in 2016, they have steadily built a following, laying the groundwork, so a powerful second album could propel them into the mainstream. Frustratingly, despite improved songwriting and a wealth of great ideas, ‘Breathe In Colours’ falls short of the mark.

Inspired by technological change and the science fiction works of Philip K Dick, for this release Haastrup has added an industrial flavour to his palette. This darker ambience is particularly effective on the title track, with its buzzing bassy sounds and chunky chorus, but only dipping his toes into electronics leaves the album feeling uneven. It’s only on the fourth song ‘Until It’s Gone’, the album really finds its groove.

With his guitars tucked away in the mix Haastrup’s diligent riffing on songs like ‘Do Your Worst’ can also feel underpowered. It’s left to the breakdown on ‘Rising Over You’ where he really makes a big impact.

With her face adorning album cover, it’s clear Maja Shining is the star. Her voice is prominent at all times, emphasising her superb talent for wringing just one more hook out of her choruses, sending them spiralling into places you don’t quite expect, particularly on ‘Rewind’. As she uses a singing style similar to Sharon Adel, the album would appeal to fans of Within Temptation. However, the production is surprisingly harsh for this type of record, which suits the noisier songs such as ‘Survive’, where she deploys a harsh shriek but can make it feel cold and hostile, especially as it emphasises her weaker melodies.

‘Breathe In Colours’ is a record of two halves, the heavier and more experimental first act disappoints yet once it settles into a safer sound, it’s far more satisfying. The beautiful and angsty ‘Pieces’ prove just how good they can be. It’s just a shame not every song makes such a good impression.

‘Breathe In Colours’ by Forever Still is released on 29th March on Nuclear Blast Records.