Review: Five Finger Death Punch – And Justice for None 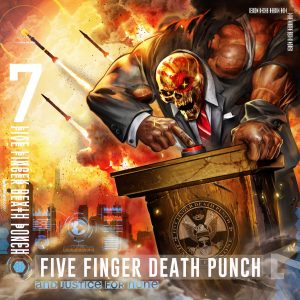 This isn’t going to be one of those reviews you’ve read countless times that slates Five Finger Death Punch for producing easy-to-digest jock metal. It’s a tried-and-tested formula that has propelled them to becoming America’s most commercial metal export and made them a gateway band for younger fans seeking more aggressive music. No, this review of seventh album ‘And Justice For None’ is a review that slates Five Finger Death Punch for coy attempts to rip off Bon Jovi.

As the Las Vegas quintet’s profile has risen their sound has made the gradual shift from groove laden metalcore to arena-ready hard rock, but on ‘And Justice For None’ they let their identity get swallowed by overdoses of synthetic balladry. Tracks like twangy country rock offering ‘Blue on Black’ tips it’s straw hat to Mr. Jon Bon with all the sentimentality of a supermarket greetings card. Further along, ‘I Refuse’ laments “I’m tired of living life like it’s a dream” arranged into washy radio rock harmonies that could fit nicely on Nickelback’s ‘All the Right Reasons.’

Unfortunately, even the more uptempo tracks on this album feel tired and lacklustre in their performance. Opening tracks ‘Fake’ and ‘Top of the World’ are catchy doses of heaviness punctuated by Ivan Moody’s signature screaming and singing trade-off, but they lack the vibrancy and urgency that made tracks on ‘War is the Answer’ and ‘The Wrong Side of Heaven…’ double albums so remarkable.

Topped off with layers of synthetic post-production on ‘When the Seasons Change’ and ‘Will the Sun Ever Rise’ this album carries itself off with all the threat of an early 2000’s Dido album. More than any band struggling to keep hard rock an exciting genre, ‘And Justice For None’ is a sonic departure by Five Finger Death Punch from which no one benefits. This record is a faceless slab of radio rock masquerading as artistic progression. Stick to the jock metal next time.

‘And Justice For None’ by Five Finger Death Punch is out now via Eleven Seven Music.