Review: Five Finger Death Punch – The Wrong Side Of Heaven And The Righteous Side of Hell, Vol. 2 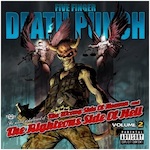 Supporting Avenged Sevenfold on their current run of European dates would blow many bands out of the water, especially with how massive the California quintet have become. This is not, however, the fate of Five Finger Death Punch. Avenged’s fellow statesmen have proved more than a match on every step of the trek throughout the continent, it would seem, and when listening to the record they’re here to promote, it’s hardly surprising. The Los Angeles metallers are in the form of their life, and the second half of the two-album ‘The Wrong Side of Heaven and the Righteous Side of Hell’ series is a blistering statement of world-conquering intentions if there ever was one.

There’s no messing around, and the chugging intro to opening track ‘Here to Die’ is straight to the point. As always the instrumentals of the five-piece are the kind that vibrate walls and rattle bones and Ivan Moody’s vocals are the kind that have you screaming along and attracting all manner of worried looks from those around you. The atmosphere is no less explosive across the following tracks ‘Weight Beneath My Sin’ and ‘Wrecking Ball’, and while the former of the two is another anthemic-sounding shout-along, the latter trades out the arena-filling sound for a brand of angry “fuck you” metal ripped right out of the Disturbed playbook. If you need a fresh addition to your playlist of songs to accompany your angry stomps to your local newsagent to buy a pack of smokes with a fake ID because your parents just don’t get you, ‘Wrecking Ball’ should probably be a front-runner.

The album’s lyrics, mostly provided by rhythm guitarist Zoltan Bathory, can have your eyes rolling at times, but for the most part its either anger fuel or pump-up music. ‘Battle Born’ and ‘From the Cradle to the Grave’ sit on opposing sides of the divide, but there’s a reason that ‘Battle Born’ was chosen as the record’s lead single. By FFDP’s standards it’s a reserved track if anything, but it encapsulates the anthemic sound that the band have started to evolve into. From the first bar, meanwhile, ‘Matter of Time’ is a belter, harbouring the album’s best instrumental work and Moody at his vicious best. It’s unlikely, however, that any FFDP fan would buy the album for tracks like ‘The Agony of Regret’, a pointless interlude that sucks out a large amount of momentum from the album. ‘Cold’ slowly builds things back up but it’s ‘Let This Go’ that pulls the quintet back to their incendiary best as they romp back into “anger fuel” territory with undoubtedly the highlight of the album’s second half.

‘My Heart Lied’ is the penultimate effort on the record’s main tracklist, but between ‘Let This Go’ and closing track ‘A Day in My Life’ it just fades into the background. It isn’t a standout track but it keeps things ticking over, and while the LP does not perhaps end on the highs that it hits in earlier stages, the final tracks certainly don’t take away from the quality of the album as a whole. It doesn’t end for good, however, until Five Finger Death Punch have become the millionth band to cover ‘House of the Rising Sun’. It’s hardly the best version of the song you’ll hear, but FFDP fans will find it hard to complain. It’s a strong addition to the album’s final death throes; maybe not a challenge to ‘Bad Company’ as the band’s best cover, but to send the ‘Wrong Side of Heaven’ two-parter out, it’s a solid one.

We were hardly complimentary about ‘Volume One’, that much is true, but it’s staggering how many opinions can differ from person to person. If you’ve found yourself a fan of the post-2000 arena metal sound peddled by the likes of Avenged Sevenfold, Stone Sour and Atreyu, then it’s really time that you jumped on the FFDP bandwagon, provided you haven’t already. If you have, it’s unlikely you’ll be hopping off any time soon. The Los Angeles outfit are still going from strength to strength, and there are no signs of them slowing yet.

‘The Wrong Side of Heaven and the Righteous Side of Hell, Volume Two’ by Five Finger Death Punch is out now through Eleven Seven Music.