Review: Five Finger Death Punch – The Wrong Side Of Heaven And The Righteous Side Of Hell Vol. 1 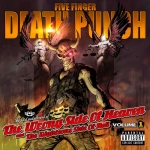 If, like me, you’re an observant type, you may have noticed a little staleness in the line-ups of Download Festival. The same old acts seem to be on a rotational cycle, with few genuine candidates in a position to assume a bill-topping place. However, having listened to the fourth album by LA metallers Five Finger Death Punch, a band whose previous three records have reached “Gold” certification by the RIAA, it’s eminently clear that metal completely deserves its stasis – if this is the kind of horrendous shit that sells, there is no future for heavy metal.

Sounding like a throwback to the most atrocious early-’00s metal bands mixed with the most unlistenable parts of Corey Taylor’s other band Stone Sour, Five Finger Death Punch represent the absolute nadir of creativity and artistic merit – this is “music” for knuckle-dragging, Tapout-shirt wearing mouth breathers. You have to laugh at how unbearably appalling ‘The Wrong Side Of Heaven and the Righteous Side Of Hell Vol. 1’ is; if you let how bad this album is sink in for just a second, you may find yourself reaching for the nearest sharp object to jab through your eardrums into your brain. Actually, that’s a pretty good tagline for the quintet; “5FDP – So Bad, They’ll Make You Want To Self-Lobotomise”.

Vocalist Ivan Moody (real last name Greening) seems to have a real violence fetish; most songs are testosterone-filled confrontational assaults – no wonder they’re purported to be extraordinarily popular amongst US soldiers fighting in Iraq; after listening to tracks like ‘You’ and ‘Burn MF’ (so dreadful they make Disturbed and Coal Chamber look good), I feel like touting my shiny metal penis replacement too. In between creating “fight music” for creationists, ‘Wrong Side Of Heaven’ posits FFDP’s take on existential ennui, including an inference that God is female (HASHTAG CONTROVERSY). ‘M.I.N.E (End This Way)’ is their ham-fisted attempt at a “totally deep, bro” ballad; you may be in the dark as to why she left you Ivan, but listening to this atrocity, I have some theories.

The most ominous part of this record is the fact it’s only ‘Vol. 1’, implying MULTIPLE VOLUMES. FFDP can’t seem to finish one record without serious padding, let alone two. There are 9 songs worth of original material here; the rest of the 14(!) tracks is made up by an abortion of a cover of LL Cool J’s ‘Mama Said Knock You Out’, and already existent tracks featuring the vocal “talents” of Max Cavalera (Soulfly/Sepultura) and Jamey Jasta (Hatebreed). This album’s one sole vaguely plausible saving grace is its decent production – Zoltan Bathory (waste of a perfectly bitchin’ name if you ask me)’s guitar licks sound crisp; proving they didn’t completely waste the budget over a million sales can give you on unnecessary guest appearances.

In Quentin Tarantino’s ‘Kill Bill’, Uma Thurman’s “Bride” kills her titular nemesis Bill (played by David Carradine) with the Five Point Palm Exploding Heart Technique (which could conceivably also be called the Five Finger Death Punch); however, this album is the aural equivalent of Carradine’s real-life demise, discovered in a hotel wardrobe after a spot of autoerotic asphyxiation went awry. This kind of intellectually bereft nonsense will, unfortunately, have an audience, but it’s hard to comprehend what sort of anachronism will enjoy this asinine claptrap in 2013. Anyone with more than 12 brain cells to rub together would do well to give this abysmal record an 100-metre restraining order.

‘The Wrong Side Of Heaven And The Righteous Side Of Hell Vol. 1’ by Five Finger Death Punch is available now on Eleven Seven Music.