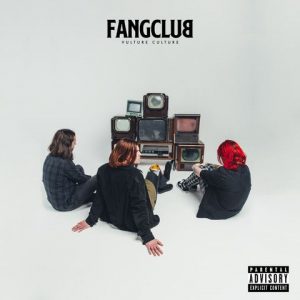 Irish grunge-rockers Fangclub had a storming hit with their self-titled debut. Straight down the line, it was a record of big, simple sounds, driven by absolutely watertight songwriting. It came at a price. Guitarist/vocalist Steven King struggled with his mental health and turned to drugs. As catharsis, the band retreated to a small studio in Wales where they spent a month creating ‘Vulture Culture’. Channelling King’s experiences, they have also managed to capture enough caustic energy to ensure it sounds absolutely huge.

True, the album takes a little while to get going, the six-minute ‘Last Time’ could only be an opener without killing the momentum. However, once the title track kicks gear, it doesn’t hold back.  From here everything feels blistering and muscular without sacrificing honesty with ‘Hesitations’ being the clearest example.  Using a riff big enough to bulldoze a house, it plays with Nirvana-style dynamics, gloomy vocals and scuzzy basslines then pummels you with a chorus. This, and songs such as ‘Nightmare’ reek of Fangclub‘s familiar sound, but elsewhere they are keen to try new things.

At its most interesting, ‘Black Rainbow’ uses distortion to distance King’s voice from the lyrics. It’s surprisingly effective, especially as it enters an almost dreamlike chorus. Similarly, ‘Every Day’ feels different in the way it uses moody and atmospheric guitar parts. You’re also lulled into a false sense of security by ‘Last Time’, only for it to open up with an extremely satisfying riff.

To keep his lyrics raw, King left it until the last minute to write them. This works very well on ‘All I Have’, which digs into a well of honesty, managing to convey his anguish without losing its driving pop sound. However, on ‘Last Time’ they do feel a little thin, especially stretched over its prolonged runtime.

Passionate and powerful, ‘Vulture Culture’ is the sound of Fangclub fighting their demons and spreading their wings. Built around repressed energy and guided by the heart on its sleeve, it always hits hard.

‘Vulture Culture’ by Fangclub is out now on Vertigo Records.