Review: Estrons – You Say I’m Too Much, I Say You’re Not Enough 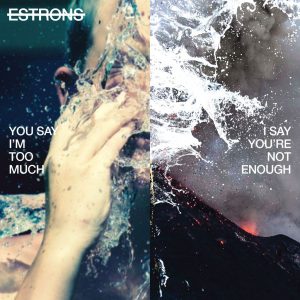 Even from just a general glance at the pull quotes taken from them, Estrons clearly want to be their own entity, completely divorced from anyone else. The fact that their name means ‘misfits’ in Welsh says a lot on its own, but with vocalist Tali Källström already carving out the strong, confrontational image of a ready rockstar for herself, there’s no shortage of self-assuredness here.

And while ’You Say I’m Too Much, I Say You’re Not Enough’ doesn’t quite hit those lofty heights just yet, it’s about as strong a start as the band could hope for, pairing hook-driven alt-rock with a more jagged take on indie-rock for a highly accessible listen. The likes of ’Make A Man’ and ’Body’ are probably the best examples with their sharp, sassy guitar work, while the likes of ’Jade’ and ’Aliens’ feel almost Joy Formidable-esque in how thick and deliberate they come across.

It’s definitely not foolproof though, and with as few bells and whistles as Estrons have, they can step into repetition with mixed results. The very ‘90s-style buildup of ’Jesus…’ is definitely familiar in its jangling guitars and softer undertones, but it still works. Although the same can’t be said for a track like ’Cameras’ which feels more forgettable than it should. It’s an issue that never bogs down Estrons’ approach too much, and they can stay relatively consistent for it, but a sound like this can teeter towards being uninspired easily, and that does happen here.

Still, for a debut that’s getting their feet on the ground, ’You Say I’m Too Much, I Say You’re Not Enough’ pretty much does everything it needs to going forward; a base sound is established, and enough room is left to expand on it in future. It’s hard to say what those expansions may be given where on the musical map the band have situated themselves, but there’s enough reason here to keep an eye out regardless.

‘You Say I’m Too Much, I Say You’re Not Enough’ by Estrons is released on 5th October on Gofod Records.