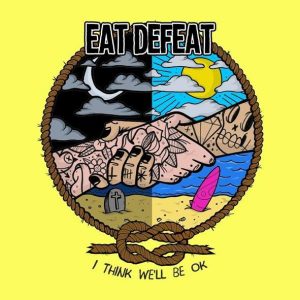 Nowadays, the title “pop-punk” has somewhat lost a lot of its previous positivity and rawness. It seems that there’s a tendency for bands within the genre to sound very polished and pen overtly negative lyrics despite the genres’ happy-go-lucky sound. One band aiming to steer clear of these tropes, however, are Leeds’ Eat Defeat, who on their latest release, ‘I Think We’ll Be Okay’, bring back the feel-good, nostalgic pop-punk in refreshing fashion.

For starters, there’s a rawness in the production which draws on influences from skate-punk and DIY-punk. Tracks such as ‘A Little Less Than Okay’, ‘Nothing’s Wrong’ and ‘Can’t Say I’ll Miss You’ show this brilliantly, with blazing, highly-distorted guitars grinding over double-time kick drums and pounding bass-lines. It’s a familiar format, of course, but what the record lacks in variation, it makes up for in its fast-tempo, smash-and-grab energy – something highlighted by the cheeky, 42-second, quick cut ‘Duvet Day’.

While many of the choruses also lack a certain crunch or hook, it’s actually quite nice to not hear a pop-punk album full of formulaic songs that build up their verses into generic, glossy and predictable, pop-line choruses. On the lyrical side of things, the group pack the record full of optimistic, motivational lyrics, particularly on ‘Running In Place’, ‘Scorched Earth’ and finale ‘Not Today, Old Friend’, as well as being something that’s hinted at by the positive title of the record.

It might not be ground-breaking in any way, shape or form, but what Eat Defeat do really well on ‘I Think We’ll Be Okay’ is remind us of the unpolished, “who cares?” attitude that made us fall in love with this genre in the first place.

‘I Think We’ll Be Okay’ by Eat Defeat is released on 3rd August on Bearded Punk Records.