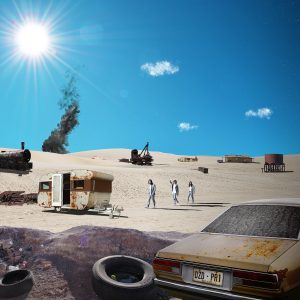 After a decade of writing flat out dance-punk bangers, there is the inevitable moment when a band feels like a change is due. For Brisbane duo DZ Deathrays’ ‘Positive Rising: Part 1’ is their turning point. Having become a trio with the addition of new member Lachlan Ewbank, the band want to prove they’re more than just a party band.

From the get-go, ‘Hi Everyone’ sets the tone for DZ Deathrays’ new direction. With an atmospheric drone guitar and layering of instruments, the tone is definitely more experimental compared to what DZ Deathrays fans may be used to. Despite the introduction and verse, the chorus brings back a more punk-y feel.

Following on, the band stick to their background with tracks such as ‘Still No Change’ and ‘IN-TO-IT’. Both tracks are mosh-worthy, punk club favourites. ‘IN-TO-IT’ may have a vibe that fans are fond of, however the vocals/lyrics in the verse sound clumsy. When Shane Parsons questions “What the hell is in my head? I keep feeling like I’m dead, and I’m into it” though it might be trying to sound delirious to be in-keeping with the song, it just sounds awkward.

As far as DZ Deathrays’ newly developed sound, ‘Hypercolour’ starts out like a Californian indie track. With clean strumming guitar, wavy vocals, a clear backbeat, the track is a lot more chilled out. It is evident that DZ Deathrays are using their new lineup to their advantage, in trying out new arrangements. For example, ‘Snakes’ follows this summery indie vibe, but flows into the sound that is familiar from past tracks. ‘Positive Rising: Part 1’ ends as it begins, with a more experimental outro in ‘Silver Lining’.

‘Positive Rising: Part 1’ shows DZ Deathrays’ ability to change it up a bit. The band manages to add something different, while still keeping the sound that will please longtime supporters. It will be interesting to see what Part 2 holds.