Review: Dude Trips – Through Love And Death, You’re All I Have Left 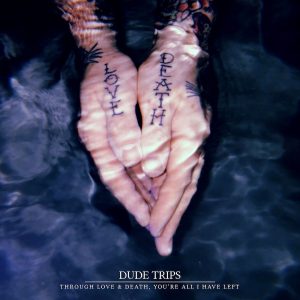 Despite what you think of the emo genre, you have to admire the sentiment it offers. It’s something Dude Trips repeatedly execute on their debut album. Sure it has a dramatic title but once you’ve heard these 10 songs, it’s fitting as the Scottish quartet craft a mix of brittle slow burners and retrospective rushes of urgency.

Undoubtedly, Dude Trips are influenced by a wealth of emotional alt-rock bands that have come before them. However, it is their detailed songwriting that makes them stand out.

Throughout, Shaun Ross and Jamie Mathers swap lead vocals, sharing tales of past relationships, departed friends and family, and of days gone by. ‘Blank Canvas’‘ gradual build is clouded in the bitterness of a former lover. “It was the alcohol that got you down on your knees,” sings Ross. While ‘Sunday Club’ is buoyantly delivered, highlighting their ability to blend nostalgia with optimism. Likewise, ‘Subbuteo’ and ‘In Between Days’ look wistfully at the past and are complemented by bold, infectious hooks.

Although it’s easy to separate the stripped back cuts from the melodic upbeat ones, it is the rawness of ‘Tampa Bay’ and ‘Kit’ that leave a lasting impression. The former is engulfed in regret and heartache. Whereas ‘Kit’ exemplifies Dude Trips‘ ability to tell intricate stories by writing a mournful tribute to a young victim of suicide. Both have a compelling and tender quality.

Their diaristic songwriting comes to fruition on the closing track, ‘Through Love and Death’. Its atmospheric build sees Ross talk directly to a friend who has lost their father; “Is it fresh like the flowers that decorated his name?” It gives way to bold drum work from Sean Mitchell and a towering guitar line from Scott Burnet, serving as a final emotional release.

‘Through Love And Death…’ might be seen by some as rehashing old ideas, but it’s certainly as enticing as anything that has come before it.

‘Through Love And Death, You’re All I Have Left’ by Dude Trips is released on 31st May on Side Mission Records (pre-order).