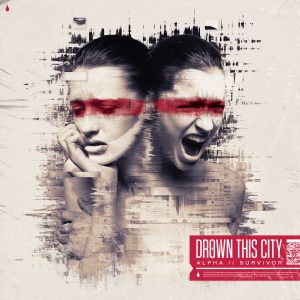 Melbourne’s post-hardcore scene added to its ranks in 2016 when Drown This City dropped their debut record, the ‘False Idols’ EP. Full of promise and poise, the release’s warm reception was soon forgotten by the band as they entered a period of turbulence and change.

Returning with a new bassist, Matthew Bean, and a new label, UNFD, the group’s sophomore EP, ‘Alpha // Survivor’ presented the question of if they could reignite that initial flame.

It is appropriate that lead single ‘In Your Image’ presents a microcosmic answer, illustrative of both the positives and negatives. The abandon with which dense, hefty riffs are torn into is representative of the EP’s arrangements in general, with ‘Stay Broken’ the clearest of other such examples. It is enjoyably uncompromising, and also impressive are Alex Reade’s regal, lofty chorus melodies, which make for Drown This City‘s most distinctive hallmark.

However, both these key aspects may be viewed from a less favourable angle. The robust riffing is little more than that, without truly memorable breakdowns or dynamic isolation. Meanwhile, the screams of Reade and Bean are strangely pedestrian, rarely achieving visceral impact. In the case of melody, such sections are simply adequate, and after initial listens, none stick easily.

‘Alpha // Survivor’ is strongest when it is fresh, such as when the above formula is first introduced. But other examples are present, such as ‘Null’‘s touches of electronicore, even if the track regresses towards more of the same. ‘Love Makes Cowards Of Us All’ is the EP’s standout courtesy of the most varied verse structures on show, besides the strongest chorus and rare glimpses of dynamic sensibility.

Still finding an identity and without a full-length album to their name, Drown This City remain fledglings, but ‘Alpha // Survivor’ is largely unsatisfying. Its flashes of promise are suppressed by a dominant, wearisome formula – and yet, those flashes are there, suggesting the best may yet come.

‘Alpha // Survivor’ EP by Drown This City is out now on UNFD.