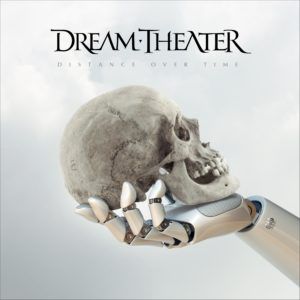 With more than thirty years and thirteen studio albums under their belt, Dream Theater have become progressive legends, building a career out of enormous sweeping records, unbridled creativity and virtuosic performances. On 2016’s ‘The Astonishing’ they took prog-rock to the Nth degree with an expansive underlying narrative, overblown theatrics and hugely flabby run-time. New album ‘Distance Over Time’ is a total contrast and all the better for it.

Abandoning their usual methods, the band used their 2003 album ‘Train of Thought’ as a template, writing the nine songs over eighteen days and embracing a heavy metal sound. Hence guitarist John Petrucci gets star billing here, with his riffs providing backbone while colouring the whole record with a biting guitar tone. There’s a fantastic drive to songs such as ‘Paralysed’ and ‘Fall Into the Light’ with big grooves emphasised by the keyboards of Jordan Rudess. Of course, Petrucci gets to shred, and at times, there’s an almost classic-rock feel to his work; flamboyant, yet punching in just the right places.

While there’s no doubt the whole band are technically accomplished, here their showmanship is paired back, direct and digestible. The songs tread a defined path and feel distinct while avoiding the soulless fugue their longer records can slip into.

It’s a varied collection, enhanced by contrast. Singer James LaBrie may revel in quiet charm on forlorn ballad ‘Barstool Warrior‘, but he clearly wrote the enormous chorus of ‘Out of Reach’ for an arena. Similarly, the short metal-flavoured rocker ‘Room 137’ is powerful yet restrained while the spiralling ‘At Wit’s End’ features a stronger dose of their traditional expansive sound.

A relatively concise yet creative record, what ‘Distance Over Time’ lacks in excess it makes up for in focus and power. Your enjoyment will depend on how pure you like your progressive music. It’s a great jumping on point for neophytes, but long-term fans may find it shallow and scouringly heavy. Either way, it’s a refreshing, welcome change of style.

‘Distance Over Time’ by Dream Theater is released on 22nd February on Inside Out Music.