Home » Reviews » Album Reviews » Review: Down By Law – All In

Review: Down By Law – All In 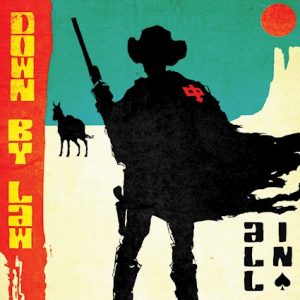 Chances are you’ll have seen at least a couple of albums like this one lately, where older punk bands, such as T.S.O.L, No Fun At All and the UK Subs, have reemerged with new material that aims to reclaim past glories, only to delivery middling rock ‘n’ roll.

So to carry on this litmus test of sorts, California’s Down By Law have returned with their first album since 2013. ‘All In’ also sees the “classic” ‘90s lineup reunite, and compared to the aforementioned three acts, this is definitely better than all of them. Although it’s firmly in the mould of aging punk rock with only touches of anything more.

Credit where it’s due though – when they do come in like on the faster rollick of ‘Mountain’ or ‘Then And Tomorrow’. There’s some solid work to be made from it, especially with Dave Smalley’s clearer, more pronounced vocal delivery.


With the default style being of restrained, middle-aged punk, it can get stale pretty fast. There’s a weariness to the likes of ‘Rebrand It’ and ‘Mannequin’ that’s hard to avoid, and when a lot of the album just seems to coast along at a half pace, there’s little else to say.

It’s listenable, but that never amounts to anything verging on a real highlight, and it feels like Down By Law are playing for an easy win above anything else, enticing the aging punks who want the intensity turned down considerably.

And in principle, there’s nothing wrong with that – that’s a demographic that needs catering to as much as any other – but ‘All In’ comes across as a something of a slog to everyone else. It’s not precisely bad, but there’s so little to it that it sparks next to no reaction at all.

‘All In’ by Down By Law is released on 3rd August on Cleopatra Records.