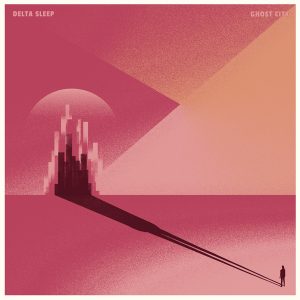 Brighton is a city that’s been outputting exciting artists and projects, and with names like Orchards and The Physics House Band leading the way with critically acclaimed, genre-bending releases. It’s a vibrant scene that now almost expects eccentricity from its artists. The latest in this vein from the sea-side town is Delta Sleep’s sophomore album – ‘Ghost City’. Instead of playing into the more experimental nature of their scene, it sees them hone their more traditional math-rock side, producing some delectable, impressive alt-rock.

‘Dotwork’ is a highlight that feels especially reminiscent of their scene: timing is played around with and melodies meander around the complex structures. While someone like The Physics House Band use this to create a tense, cosmic atmosphere, Delta Sleep revel in the relaxed, earthly nature of their music.

That’s not to say it’s a totally ambient affair though. There are streams of intertwining hooks and patterns to their guitar sections, weaved between the drum lines and vocal highlights. From gentle indie-inspired choruses to gradually rising sections of oddball noise, they make their often-ethereal sound as physical as can be.

Leading track ‘Single File’ is one of the most sonically bold moments on this project. From vocals that reach a powerful yell to a bridge drowned in hefty down-strums, it’s a full-on piece that isn’t afraid to flex it’s bolder elements.

Alternately, the album feels worst when it’s at its most relaxed. The uber-sleepy ‘Glass’ is lethargic in its progression, never really reaching a point that feels satisfying. Instead, it feels like a wasted track slot that could have blossomed into a more emotional instrumental piece given the chance.

While they may not have the appeal that comes with the more obscure niches of their contemporaries, Delta Sleep have continued to prove they are one of the most consistent and dynamic groups in straight-up math-rock. Without relying on a niche or a gimmick, there is bountiful evidence of their talents here.