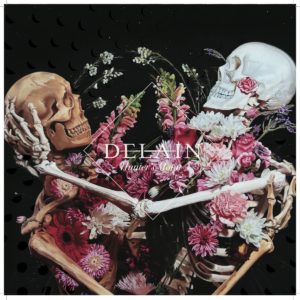 Compared to bands like Nightwish or Within Temptation who’ve fully dominated the symphonic metal scene, Delain haven’t broken through to the same degree, and it’s not too difficult to see why. They’ve always been serviceable, but have never made as much progression in their music, and thus have remained fairly stagnant for their last handful of albums. Still, there’s evidently an audience, especially when ’Hunter’s Moon’ is effectively a live album with a handful of new tracks to fill it out.

And like with most live albums, it feels like something that’s really only going to appeal to existing fans almost exclusively, and thus it’s hard to judge as its own independent entity. It can certainly be questioned how warranted it is, especially when Delain aren’t exactly the biggest players in symphonic metal, and that does translate to how much enjoyment can be gleaned from it. Yes, Charlotte Wessels does have a great voice, even in the live environment, but the likes of ’Your Body Is A Battleground’ and ’Sing For Me’ don’t really bring much that a Nightwish live offering would have with much greater spectacle, especially with how little they differ from their studio counterparts.

As for the new tracks, they’re about as standard Delain fare as it comes. There’s been next to no evolution for this band throughout their entire career, and while there’s definitely a sense of bombast to the likes of the title track and ’Art Kills’, it’s very telling that they appear here as add-ons more than anything else. None of them are necessarily bad, but for a band who already lack distinction, more of the same isn’t helping.

And that’s largely true for ’Hunter’s Moon’ as a whole. It’s bound to satisfy existing fans, but it’s hard to escape how perfunctory it all feels, lacking in material worth checking out for anyone beyond the most dedicated of diehards. Maybe that was the aim, but Delain can’t really afford to limit their appeal more than they already have.

‘Hunter’s Moon’ by Delain is released on 22nd February on Napalm Records.