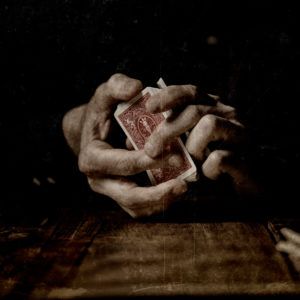 It’s all change at camp Defeater. With their new record, they’re aiming to redefine themselves. Hence, it is self-titled, but don’t panic, this is very much the band you know. In many ways, it’s their most straightforward record. You won’t find any acoustic interludes and there’s no clean singing but it feels so different.

Notably, with guitarist and long-time producer Jay Maas having departed, Will Yip has taken the reigns. That’s no overstatement. This wasn’t a light decision and his approach has a huge influence on everything. While the band are on top form and you get 11 tracks of furious hardcore laced with heart and soul, the multi-layered sound is very much his. It’s a ruthlessly effective sound too and small elements are given huge power. Notably, whistles and squeals of feedback hold songs such as ‘List & Heel’ together. It’s extremely effective, creating tension and atmosphere. Particularly on ‘Hourglass’, where the feedback behaves like a horror soundtrack, fading in and out in a terrifyingly creepy way.

The album’s mix is extremely powerful. Yip emphasizes different elements depending upon the song, shuffling each part around and shaping the overall sound different ways. For a band whose dominant characteristic was yelling, it’s a bold move, but it pays off, giving the album extra depth.

As a teaser single, ‘Mothers & Sons’ very much set the stage. The song flows, but Derek Archambault’s vocals feel almost MIA. He is so dominant on previous outings that having him buried in the mix can be frustrating. Yet, it’s for the best. It feels like a fresh take. On this album, the vocals are less intrusive and less monotone, which gives other elements a chance to shine, but you’ll need patience to appreciate it.

Defeater’s self-titled record is a restatement of their sound. By redefining what they can be without changing their template, they present themselves as a revitalised band playing to their strengths.

‘Defeater’ by Defeater is released on 10th May on Epitaph Records.