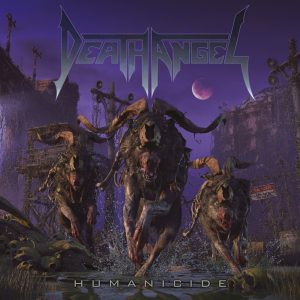 ‘Humanicide’ is the ninth studio album from veteran thrashers Death Angel and it’s another top-quality record, with Rob Cavestany, Mark Osegueda and co. defying the march of time to produce another explosive album of intensely aggressive thrash metal.

The first half is the stronger; the title track kicking off with an epic opening salvo that gives way to a rip-roaring machine gun riff and a classic metal scream. It’s no-holds-barred classic thrash at its finest with a killer hook making it highly accessible without sacrificing any power. ‘Divine Defector’ then cranks up the intensity as Osegueda pushes the vocal to ragged extremes on a seriously aggressive number.

As expected, there is a definite old school air, ‘I Came For Blood’ for instance, boasts a riff straight out of the Judas Priest back catalogue, while ‘Aggressor’ has an intro that harks back to 1989 before the thrash gallop resumes. Nevertheless, they don’t sound dated; the smooth tempo changes and atmospheric mid-section keeping it fresh.

Where they really shine is on the centrepiece, ‘Immortal Behated’; its classy guitar work leads a slow boiling darkly atmospheric ballad pulsating with intensity. The vocals are sublime, the hook is simple but superb and it’s instrumentally stunning right through to the dark piano outro.

Although the second half is less memorable, it is still quality thrash firing on all cylinders. For instance, the deeper groove of ‘The Pack’ pulsates with controlled aggression and their stylish, signature racing riffs, while ‘Ghost of Me’ is aggressive and face-meltingly fast, as is the full-tilt finale of ‘Of Rats and Men’.

There isn’t a duff track on ‘Humanicide’ and it is a strong record, albeit slightly weighted in favour of the first half. Even so, Death Angel are once again staking their claim as the finest thrash band of the moment and on stage, without the slick production to trim their harder edges, these tracks are sure to have an even greater impact.

‘Humanicide’ by Death Angel is out now on Nuclear Blast.