Review: Death And The Penguin – Anomie 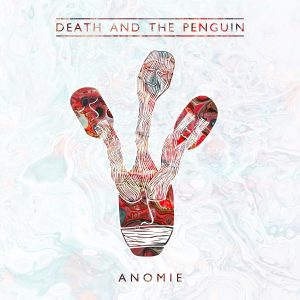 Five years into their career, eccentric London math-rockers Death And The Penguin are finally gracing us with their debut album. They’ve dropped a pair of absolutely wonderful EPs in recent years, subverting the expectations that come tagged with their genres to make a name for themselves as some of the smoothest songwriters out there. Now with ‘Anomie’, they look to cement that status.

Some of their most defining features float at the foreground of this album. Their creative side glitters, from the chanting and pacing rhythms of single ‘Kill Saatchi’ and its anchored chorus, which balances out the sparkling riffs and catchy verses. They confidently test how far they can take a more traditional rock structure while mixing in experimental ideas and less radio-friendly elements.

Meanwhile, follow-up track ‘Space 1998’ explores their more atmospheric realms. From thumping basslines to playfully tapped guitar melodies, it’s a cross of cosmic sound and technical comradery. It plays fast and loose with its concepts while doubling down on their mood-building, which forms what could be described as the British lovechild of Tool and Dance Gavin Dance.

They explore newer ideas with ‘Was It Kindness’, which blends their math sound with pacing balladry and powerful piano backing. Their creativity is more measured but still delivers, staying true to their reputation while taking experimental footsteps.

Vocalist Toby Smith sounds brilliantly emotive, and this comes to a fantastic peak on ‘Leatherface,’ which sees him playing off manic semantics and shuffling guitar patterns. “Collapsing self-esteem and what it means and where it leads is a month of being a kaiju to your city” is a particularly poignant yet bizarre moment, one of many in a song that excels in oddity and strangeness.

It’s an excellent achievement to encapsulate your creativity, personality and (crucially) your sound into your debut album. Death And The Penguin manage to bottle their flame, and show signs of how they’ll fan the fire the next time around.

‘Anomie’ by Death And The Penguin is released on 27th July.